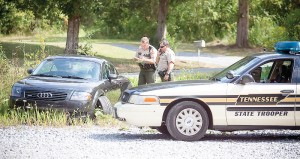 A Johnson City man is facing his third driving under the influence charge after he crashed his car on Lovers Lane Wednesday morning.
Tennessee Highway Patrol Trooper Bruce Bolton said James Christopher Henderson, 28, 128 Fairlawn Drive, Johnson City, also fled from the scene of the crash. Henderson has been charged with third offense driving under the influence, leaving the scene of an accident and driving on a suspended license.
The single-car accident occurred shortly after 11 a.m. when Henderson drove his 2001 Audi TT off of Lovers Lane, through a grassy area into the gravel lot under the Lynn Avenue bridge, Bolton said. The front axle on the car was broken in the accident.
“What happened was that he was driving while intoxicated,” Bolton said. “He was coming down Lovers Lane and his car left the side of the road.”
Bolton said after the crash, Henderson left his car and walked from Lovers Lane to Lynn Avenue, where he was apprehended by Bolton when he was walking across the bridge. Bolton credits the help of a witness in locating Henderson as the driver from the crash.
“A motorist passing by pointed him out that he was the man who had left the accident,” he said.
Bolton was taken into custody and his car was towed from the scene.