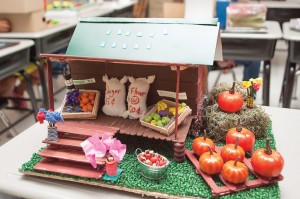 A lesson on communities brought the community of Elizabethton inside Ginger Deloach’s second-grade classroom at West Side Elementary.
To wrap up a session on different types of communities, students were assigned the task of constructing a miniature version of a building found in Elizabethton.
Students built everything ranging from the house they used to live in to businesses, churches and public safety offices.
Liam Cannon built a version of the Elizabethton Electric Department’s building. His model showed the offices in the EED, along with items used by the department such as poles, transformers and power lines.
“My dad works there,” Cannon explained. “The Electric Department helps very much and it looks like a cool place.”
Brock Stewart made a model of the Stateline Drive-in Theater. His model included the ticket booth, drive-in stalls, the snack bar and, of course, the big movie screen.
“I thought about it in my head for a while, and I decided I needed to make the drive-in,” Stewart said. “I really like going to the drive-in. I like playing football there and watching the movies.”
His choice could be considered a first-run: Deloach said that in her 25 years of teaching and asking students to build models, she’d never had a drive-in movie theater submitted.
“This year I have two,” she said.
The other drive-in was made by Grace Woodby.
Hannah Escano created a miniature Watts Dance Studio. Inside her model was a replica of the studio, even down to the wood dance floor and the ballet bar.
“I’ve been taking dance there for two years,” Escano explained. “I can do more tricks now than I could before and I can show the teachers there. I take tap, ballet, jazz and tumbling.”
Logan Campbell recreated Siam Baptist Church for his project. The model, almost as tall as he was, just barely met the model project’s one requirement — that it fit on the student’s desktop.
“I can’t carry it,” Campbell said. “I needed help carrying it down the steps.”
The miniature Siam Baptist Church includes the rock exterior and the steeple over the entrance.
“It took a long time,” Campbell said. “There were a lot of bumps in the road. We couldn’t get the roof level. It was worth it. It looks like my church.”
Bryson Rowland made a replica of one of the Elizabethton Fire Department stations. He made sure to include his favorite part of the fire station, the fire trucks on the inside.
“I decided on the fire department because I see it every day,” Rowland said. “I like the fire trucks. They’re my favorite. I like the firemen too.”
Deloach said the models helped demonstrate the different types of buildings that make up a community.
“We talked about what makes a community and the different types of communities; rural, suburban and urban,” she said. “We talked about what makes Elizabethton and the different places that are in Elizabethton.”
Other models included Farmer John’s Produce, the Elizabethton/Carter County Animal Shelter, the Twins Field, a Krispy Kreme doughnut shop, a horse stable, a downtown hotel, the Elizabethton Police Department, a garage, a car dealership, a mall, the future Elizabethton High School stadium and a farm.