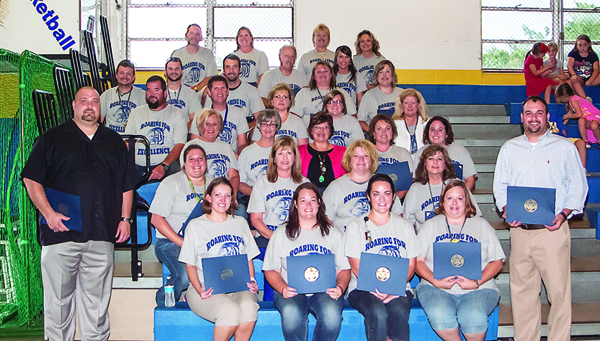 Photo by Brandon Hicks
Teachers and staff of Hunter Elementary School were honored Thursday night by the Carter County Board of Education. hunter was one of two county schools – the other being Valley Forge Elementary – to be named as a Reward School by the state for improvement in TCAP test scores.

What began with solemnity turned into celebration Thursday evening.
The Carter County Board of Education opened its meeting by honoring those who lost their lives lost in the Sept. 11, 2001 tragedy that shook our nation. A member of the Unaka High School Marching Band played Taps on the trumpet and following the Pledge of Allegiance, the Board held a moment of silence.
Following the tribute, the meeting switched gears to celebration as the Board honored the staff and teachers of Hunter Elementary School on their recent achievement with state test scores and being named a Reward School by the state. Reward Schools are designated by the state as those schools which saw the greatest overall improvement in TCAP test scores from the previous year.
The meeting was held at Hunter Elementary School, instead of at the administration office, as part of the recognition of the school’s recent achievement.
“First of all, the reason we are here at Hunter is to celebrate,” said Director of Schools Dr. Kevin Ward. “We know, as a reward school, you have grown in so many areas.”
The Board presented the teachers and staff of Hunter with special awards to document their success and their achievement. Each teacher was given a certificate and Principal Brandon Carpenter and Assistant Principal Mark Revis were presented a special plaque for the school.
Ward also challenged the teachers and staff at Hunter to “keep up the good work.” He said school system supervisors are currently visiting all the schools within the system to work on continuing improvement plans to make sure the schools continue to see growth on test scores and work on any weaknesses.
Following the presentation of the awards, the Board proceeded on to business matters.
The major order of business before the Board on Thursday evening was a change to the school system’s insurance plans.
During workshop sessions held in the weeks leading up to the meeting, members of the board learned the system’s current insurance plan structure was not in compliance with a provision of the Affordable Care Act.
“Basically we have to fix a problem,” Ward said Thursday evening. “Under that Act we have been and are discriminating.”
Under the system’s current insurance plan, staff members who were classified as “professionals” received a school system funded subsidy toward the purchase of family coverage insurance. Those employees classified as “para-professional” did not receive the subsidy.
Ward said, under the provision of the Affordable Care Act, offering different benefit plans to different groups of employees constituted discrimination. Ward said the school system was required to change the plan to be across the board for all employees by Jan. 1, 2015 in order to come into compliance with the federal law.
After studying the options available to the system, Ward recommended the Board adopt a “Limited Plan” which would be supplemented by Gap Coverage Insurance. Currently the school system has a PPO health insurance plan.
As with the current plan, the system will cover the cost of the insurance for the employee if they choose the Limited Plan with Gap Coverage. Employees can choose to remain on the PPO plan but will required to pay a portion of the premium.
“I think this is a good option,” Ward said. “This option helps us meet our mandate.”
“On Jan. 1, 2015 if we don’t meet this mandate we will be fined.”
Ward said representatives from the firm that handles the school system’s insurance policy will be holding several meetings at the schools to speak with employees and explain the plan.
Members of the Board unanimously passed a motion to adopt Ward’s recommendation to go with the Limited Plan supplemented by Gap Coverage Insurance.
In other business, the Board approved a plan to replace damaged portions of fencing around all four of the county’s high schools and to obtain architects’ drawings for the construction of tennis courts for Happy Valley High School.
Thursday was the first meeting for three new Board members – LaDonna Boone, Tony Garland and Steve Hyder. The Board also voted to select its leadership for the upcoming year. Rusty Barnett was selected as chairman and Kelly Crain vice-chairman, both receiving unanimous votes.
Next month the Board will meet at Valley Forge Elementary School, also named a Reward School by the state.