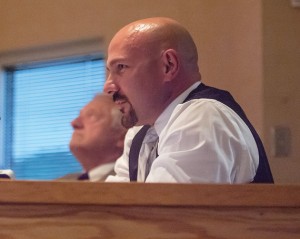 The Elizabethton Police Department will be getting a new home, and downtown Elizabethton will see the start of a multi-million dollar project – the result of Elizabethton City Council’s decision to purchase the Ritchie’s Furniture Warehouse on F Street for $204,000.
City Manager Jerome Kitchens said the project, scheduled to start in 2017, would increase the functional space for the EPD.
“I am not trying to oversell this, but there is a major capital project that we have always had on the list but we have never been able to do,” Kitchens said. “That is the police department.”
Kitchens said the first place the city looked when first discussing the project was the Ritchie’s Furniture Warehouse, located next door to the current police department. At that time, the owners – Margo and Stan Bentley – weren’t interested in selling, so city officials had architects look at plans for their second choice for location – the old Carter County Memorial Hospital property.
But the Bentleys recently changed their minds and contacted the city regarding the sale of the property. Kitchens said they want to move their warehouse to another building in downtown closer to their current furniture store.
“This is the first step in having multiple buildings in downtown remodeled,” Kitchens said. “If this is approved, there will be a $2.5 million to $3 million project in downtown. We have talked about making improvements to downtown and using our money is one way to do it.”
Kitchens said that purchasing the warehouse brought many positives to the project, including investing in downtown, having the EPD remain close to City Hall and the Elizabethton Fire Department. Additionally, he said, the hospital property would still remain with the city to be sold in the future if it was needed.
Kitchens acknowledged the city was paying a premium price for the property, but that it is “worth more to us than anyone else.”
Architect Robert Reedy said the current police department has 3,600 square feet and the new project would bring the total square footage to 16,600. The Ritchie’s Warehouse is a two story building, with 5,000 square feet on each level and a 1,500 square foot connector building is planned to join the current EPD office with the warehouse.
Reedy pointed out that this would offer more square footage than if the city had chosen to build a new EPD office on the old hospital property; the building planned for that project was a 15,100 square foot building.
Reedy said the Ritchie’s Warehouse was structurally sound but some additional floor support would be needed for the second level because of the length between the floor joists.
Councilman Richard Tester said his only concern with a remodeling project are hidden costs or unexpected problems that frequently make a project more expensive than planned. He asked Kitchens if any contingency funding had been planned for those cases.
Kitchens said a 7.5 percent contingency fund has been included in the project for the remodeling as well as a 5 percent for the new construction. He said the remodeling project was still $1,000 less than the new construction.
The remodeling project has a total estimated cost of $2,781,430, which includes the warehouse and EPD renovations, new construction of the connector building, site work, building purchase, contingency and other fees.
The new build on the old hospital property was estimated at $2,782,763. This included new construction of a building, a parking area, contingency and other fees.
Councilman Jeff Treadway asked how the city was going to pay for the warehouse purchase. Kitchens recommended splitting the cost, with $102,000 to coming out of the unrestricted fund balance and using the debt service fund balance to meet the $204,000 purchase price.
Kitchens said, by purchasing the building from city funds, it would reduce the amount needed to be borrowed against the total project.
The purchase was unanimously approved.
Council also approved a special event request for Jiggy Ray’s to host an Oktoberfest Saturday, Sept. 27 with an outdoor concert lasting from noon – 11 p.m.
The Beverage Board approved a special permit to allow outdoor beer sales for the event. The sales will be restricted, purchasers will be given an armband and only allowed to drink in an enclosed section in the walkway beside of Jiggy Ray’s.
The special permit was approved 6-1, with Nancy Alsup voting against it.
You Might Like

A lesson on communities brought the community of Elizabethton inside Ginger Deloach’s second-grade classroom at West Side Elementary. To wrap... read more