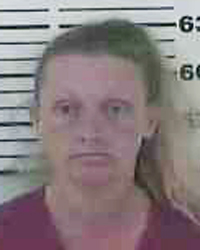 A Johnson City woman is facing multiple charges after police say she stole another woman’s identity and used it to obtain a loan.
Crystal Gail Coffman, 42, 3406 W. Market St., Johnson City, was arrested Tuesday by Elizabethton Police Department Sgt. Patrick White on outstanding warrants charging her with theft of property, two counts of identity theft and two counts of forgery. The warrants for Coffman’s arrest were taken out in January by EPD Investigator David Peters.
The investigation began on Jan. 9 when a woman filed a police report saying that a friend — whom she identified as Coffman — had stolen the title to her vehicle along with a printout of the woman’s driver’s license. The woman reported Coffman had then used the title and identification to obtain a title loan on the woman’s vehicle.
Peters said police obtained copies of paperwork from the loan agency confirming a title loan had been taken out on the woman’s car in the amount of $500. He said the loan paperwork contained the woman’s personal identifying information including her name, Social Security number and driver’s license number. The woman reported to police she did not obtain the loan and did not sign the paperwork.
Further investigation revealed a check in the amount of $500 had been issued for the loan and the check was cashed at a city bank, once again using the woman’s identification and forging the woman’s name.
“Surveillance photos and video were obtained from Citizen’s Bank where footage shows the named suspect, Crystal Coffman, cashing the check,” Peters said, adding he then located and interviewed Coffman about the incident. “She admitted to being the subject obtaining the title loan from Title Max and cashing the check at Citizen’s Bank.”
Following her arrest on Tuesday by White, Coffman was transported to the Carter County Detention Center where she is currently being held on a $15,000 bond. She is scheduled to appear in Carter County General Sessions Court on Oct. 24.