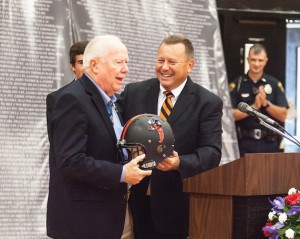 “Real heroes don’t wear capes, but they do fly. They fly helicopters.”
That description is a fitting one for Medal of Honor recipient Lt. Col. Bruce Crandall who visited Elizabethton High School Friday morning.
Crandall was greeted at the school by the EHS Betsy Band and Color Guard. The band performed portions of their show this year, which is focused on the Vietnam Memorial Wall and Vietnam veterans. A smaller version of that wall was also displayed.
The Elizabethton Fire Department displayed a large American flag over the drive into the school, and the Color Guard flanked the sidewalk to the school with their decorative competition flags for Crandall to walk through.
“This is just outstanding,” Crandall said. “I’ve visited schools before, but this is outstanding. The band, the wall, everything is great. It was outstanding because it was the students and that is the people we want to reach.”
Crandall spoke before the student body and members of the public after enjoying breakfast with a small group of students and local officials.
Crandall was drafted into the Army in 1953. He became a flight commander and later served in the Vietnam War. During the Battle of Ia Drang Valley on Nov. 14, 1965, Crandall flew an unarmed helicopter 22 times through intense enemy fire to resupply troops and evacuate wounded soldiers after others would not go because it was too dangerous. By the end of the Vietnam War, Crandall had flown over 900 combat missions.
During the Battle of Ia Drang Valley, Crandall flew a UH-1 Huey helicopter on a total of 22 missions from 6 a.m. to 10:30 p.m. and evacuated more than 75 wounded soldiers.
“People ask how we do it,” Crandall said. “We are just doing our jobs, what we were trained to do. I would not leave a someone behind to save my own skin. I am a firm believer that if it is my time to go, then I will go. If it is not my time then I need to try my hardest to make sure I don’t let someone else’s time come up.”
As a commander Crandall said he knew he would have to deal with the injury or death of some of the soldiers in his group, but that he was not prepared to have four soldiers become missing in action.
“It was hard to have them go missing,” he said. “I had them on my mind everyday. The hardest thing is to lose one of your men. To those who have family members serving, be assured that their commanders love those men and will work their hardest to bring them home.”
Crandall now serves as a mentor to the newest Medal of Honor recipients and travels to schools sharing information on the Medal of Honor Character Development Program.
He said, as a mentor, one of the things he did was counsel the newest recipients of the award.
“One of the hardest things is to convince them they did earn the award,” he said. “Most of those that deserve this awarded died and a lot have been awarded posthumously. We wear this for all those who served. Once you realize that you do this for others, it is easier to live with. Medal of Honor recipients hope that there will never be another recipient and that there will never be another war.”
Crandall’s visit to EHS was arranged because of all the work the student body had put into learning about the Medal of Honor, the character program and recognizing the county’s own citizen heroes with the Carter County Citizens Award banquet in the spring.
Student Sullivan McInturff was chosen to introduce Crandall during the ceremony.
“We welcome not just a man, but a hero,” McInturff said. “Real heroes don’t wear capes, but they do fly. They fly helicopters.”
During the ceremony, Crandall met fellow Vietnam veteran Spencer Nave, who requested to be able to shake Crandall’s hand. Nave served in the  Ia Drang Valley during the same battle that Crandall flew in to rescue troops. He was a crew chief with the A Company, 501st Aviation Battalion. Crandall served in the A Company, 229th Assault Helicopter Battalion
“I served in the same area when all that mess was going on, but I never served with him,” Nave said. “I wanted the opportunity to shake his hand.”
EHS Principal David Wright said he hoped the students understood how important an event the visit from Crandall was.
“It is purely an honor to have Lt. Col. Bruce Crandall with us,” Wright said. “The freedoms we enjoy today are because of men like him. This is a man of character and this is what a role model should be.”
After the ceremony, Crandall was named an honorary member of the Washington County Regiment of the North Carolina Militia, the reenactment group that is involved at Sycamore Shoals State Historic Park, and an honorary member of the EHS football and baseball teams.
Crandall didn’t travel alone to EHS. He was accompanied by his dog, Huey, named for his helicopter.
You Might Like

Photo by Brandon HicksTeachers and staff of Hunter Elementary School were honored Thursday night by the Carter County Board of... read more