Josh and Tabitha Wandell… one year after ALS diagnosis 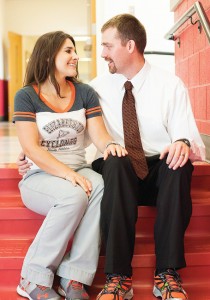 It’s been a year for making memories for Josh and Tabitha Wandell and their family.

One year after Josh was diagnosed with amyotrophic lateral sclerosis, or Lou Gehrig’s disease on June 4, 2013, family, friends and community members have rallied around him and his family to provide support to the family.

“It has been the most gratifying experience,” Josh said. “Almost all of the news you hear or read about it is negative. It almost makes you lose faith in your fellow man. When you see people rallying around our family, it shows there are still compassionate people that do care.”

In the past year, the community has held fundraisers to help provide for Josh’s medical needs and they have also donated equipment, like the Segway he uses to travel through the halls of East Side Elementary where he principal. Other people have reached out to the family, helping around the house or giving gifts just for them.

“Because of the community, it doesn’t feel like we are in this alone,” Tabitha said. “We know there are people that we can call for help. We have received support from people who stop by to help clean the house or mow the yard. They have sent us on vacation.”

So many events that have happened during these trips have added many positive memories for the Wandells.

Josh said after he received his diagnosis, they had planned to use the summer of 2013 to take their three kids; Jayla, Taylor and JT, on any vacation trip they wanted to go on. They decided that the five of them, along with Josh’s brother and sister-in-law would take a two-week road trip to visit three amusement parks; Carowinds in Charlotte, N.C., King’s Island and Cedar Point in Ohio.

After all the planning, a last minute check of the Carowinds website showed it was going to be closed for a private event during the time the Wandells planned to visit, which knocked their road trip down to the two other amusement parks.

“Cedar Point was amazing,” Josh said. “That one was the kids’ idea, but it was great.”

It was from here the community stepped in and helped the Wandell family get in more trips with each other.

“This was a very positive thing,” Tabitha said. “We were trying to cram fifty years of memories into two years.”

Josh said after he was diagnosed he was told he might live for a long time but that he might not be able to walk and have the same level of mobility that he had before, so that his family should do all the things they could together.

“So we did,” he said. “We didn’t know how we could afford it but God keeps blessing us. The plan was to have one big trip, but they just kept happening. Everyone made it happen. There is no way we could have done it without the support.”

Another highlight trip for the family was a cruise to Alaska. Josh said he had been on a mission trip to Alaska almost 10 years ago and was struck by the beauty of the state.

“If you have never been, I can’t do it justice by describing it,” he said. “It was an experience the kids will never forget. They will be able to tell their kids that they rode on a dog sled, seen a grizzly bear, seen a bald eagle. It was an amazing trip.”

The family also traveled to Dallas for a Dallas Cowboys’ game courtesy of Jason Witten, and also went to a Baltimore Ravens game where they met Ravens player OJ Brigance who was also diagnosed with ALS.

The trips with family helped give the family positive moments to share with each other, and Tabitha said it was Josh’s positive attitude that keeps her going.

“I don’t know how I could handle it if it wasn’t for his strength,” she said. “I draw that from him.”

Josh said being positive helps the family not focus on his illness, and that the most “normal” moments for the family are when they are home alone together.

“No one talks about it at home,” he said. “It is just like we have always been.”

The community’s support will be exhibited once again next Saturday when the second Race for Wandell is held, starting at East Side Elementary. All money raised will go to Team Wandell to help cover medical expenses, but more importantly the family hopes that events like the race and the Ice Bucket Challenge will help raise awareness so that a cure can be found for ALS.

“I don’t want anyone to feel what we felt when we got that diagnosis,” Tabitha said. “Before his appointment, I had been going through all the things that it could be. Someone had mentioned ALS. I looked it up and when the page opened, at the top it said two to five years, no treatments, nothing. I couldn’t read past that. When they said ALS, it was like all your dreams as a family are crushed.”

Josh said he isn’t worried or concerned about what ALS will do to him, but that it does bother him to think that his wife or children are sad or upset.

“I hate all of this for her,” Josh said, referring to Tabitha. “The only time I am sad is when I am sad for her.”

Both say that they draw their strength through the battle from the other. Josh praises Tabitha for her day-to-day strength and Tabitha says it is his positive outlook that keeps her focused.

“I think we are each other’s rock,” Tabitha said. “When one is weak, the other is strong.”

Josh says he has a peace about whatever comes from the diagnosis, even up to death.

“I know she worries and that part is hard,” he said. “It is selfish, but sometimes I would rather go on to Heaven, because Heaven is what we are living for. It is a constant battle. I know she will be fine. Until then, it is very hard.”

He added that what gets lost in the story is that his whole family is fighting the ALS battle, not just him. He encouraged people who want to send cards and prayers to him to send them to his wife.

Now, Team Wandell is focused on the race that will be held next Saturday. For Josh it will be a reunion with friends that he hasn’t seen since last year.

“It is a time for the community to get together and celebrate,” Josh said.

Opening ceremonies will start at 9:30 a.m. and the 3K competitive run will begin at 10 a.m. Awards will be given for the run, and the fun run/walk will begin at approximately 10:30 a.m.