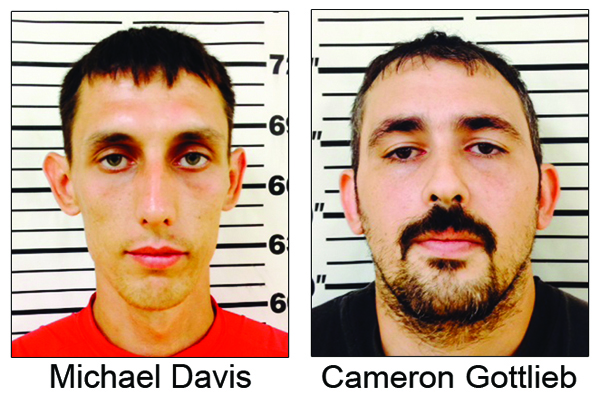 Two city men are facing drug charges after police executed a search warrant on their residence.
Michael J. Davis, 27, 1601 Burgie St., Elizabethton, was arrested Thursday by officers of the Elizabethton Police Department and charged with maintaining a dwelling for narcotics, possession of Schedule II narcotics, possession of Schedule IV narcotics and possession of drug paraphernalia.
Cameron B. Gottlieb, 33, 1601 Burgie St., Elizabethton, was arrested by officers of the EPD and charged with maintaining a dwelling for narcotics and possession of drug paraphernalia.
According to a police report by EPD Capt. Joy Markland, officers of the department along with members of the Vice Unit and the Special Response Team executed a search warrant on the residence at 1601 Burgie Street Thursday as part of an ongoing drug investigation.
“During a search of the residence officers located different pills, drug paraphernalia including spoons and pipes, numerous hypodermic syringes, a digital scale with residue on the surface, and a plastic bag with white residue,” Markland said.
According to Markland the pills were preliminarily identified as Buprenorphine (also known as Suboxone) and Alprazolam (also known as Xanax). She said the white substance and residue were identified as crack cocaine.
“Based on statements and the items recovered at the scene Gottlieb and Davis were taken into custody,” Markland said.
Davis and Gottlieb were transported to the Carter County Detention Center. Gottlieb was later released on bond but Davis is currently being held at the facility on a $10,000 bond. Both are scheduled to appear in Carter County General Sessions Court on Oct. 20.
The incident on Thursday marks the second time in four months that Gottlieb and Davis were arrested after a search warrant was executed at the residence. The two men were previously arrested on June 25, at which time Davis was charged with possession of drug paraphernalia and Gottlieb was charged with possession of drug paraphernalia, possession of Schedule III narcotics, possession of Schedule IV narcotics and maintaining a dwelling for narcotics.