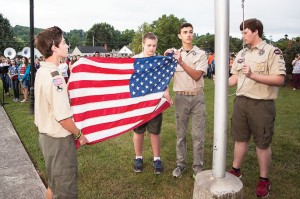 It was a star-spangled birthday celebration.
Students at T.A. Dugger Junior High School, along with a few community members, gathered in the school’s front lawn Monday morning to celebrate the 200th birthday of “The Star- Spangled Banner.”
To mark the occasion, Director of Special Education, RTI and Related Services Corey Gardenhour shared the history of the song.
TAD students and Boy Scouts Micheal Bier, Max Garbe, Michael Robinson and Ben Brown raised the American flag while a drummer played in the background. Members of the T.A. Dugger Band played “The Star-Spangled Banner” while Loretta Bowers sang the national anthem.
TAD Principal Randy Little called it an “awesome celebration.”
“First it’s important to teach because of the history of it all,” he said. “In time, when we are so focused on testing, it is important to just celebrate our history, culture, heritage and pride.”
Sunday, Sept. 14 marked the 200th anniversary of when Francis Scott Key wrote a poem after being inspired by the battle of Fort McHenry in the War of 1812.
Prior to the battle, Key had traveled to a British ship to negotiate the release of a friend who had been taken prisoner. While on the ship, Key had heard the details of the attack the British had planned for Baltimore harbor, where Fort McHenry is located. Because of this, the British held Key until the battle was over.
Gardenhour said that while watching the battle, Key became certain that the British would win.
“In the morning, when he saw that it was the American flag over the fort and not the British flag, he was inspired to write the poem, that was published and then set to music,” he explained.
President Hoover officially made “The Star-Spangled Banner” the national anthem in March 1931, according to the History Channel.