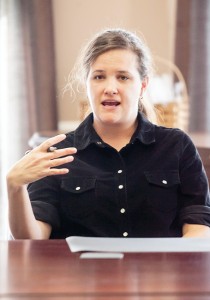 Less than two weeks after its then-director’s criminal record came to light, Elizabethton’s Assistance and Resource Ministries has a new director … and she has a familiar face.
Nikki Jones resumed her position as director of ARM Friday after the revelation that former director Anthony “Shane” Morton has a felony criminal record and is still serving a court-imposed sentence on a attempted child abuse conviction.
Board member Timothy Ross gave an update on the situation surrounding the ARM director’s position to the United Way Board of Directors Monday afternoon.
After learning of the record, he said the board met to discuss the charge against Morton and what path they should take.
In addition to the concerns about the charge and probation, Ross said, there had been some issues surrounding his job performance that the board was looking into about a week before his criminal history came to their attention.
After several executive board meetings, Ross said it was decided that Morton would stay on at ARM in a support position but that he would not work with children or with the trusty inmates who help at ARM.
Ross said he understood there was some public anxiety surrounding the position following the news. He said Morton came to work for ARM as a volunteer, and when Jones had to step back from the director’s job this past summer because of family medical concerns, it was recommended by a fellow board member to hire Morton as the director.
“In retrospect, we can look back and see we made some mistakes,” Ross said.
He noted that the board did not do a background check on Morton, which is now part of the application process for ARM employees.
Ross said it came to their attention that Morton pled guilty in 2011 to one count of attempted aggravated child abuse, which is a Class B felony under state law. In December of that year he was sentenced to serve 8 months in jail and also 10 years probation through the Alternative Community Corrections Program.
According to the Tennessee Department of Corrections, Morton is still on active felony probation and will remain until Dec. 6, 2021.
The charge against Morton stems from a 2008 incident that occurred in Washington County where Morton was accused of abusing his 4-year-old stepson. Morton was indicted in the case by a Washington County Grand Jury in March 2009.
Judge Robert Cupp, who presided over the case, ordered Morton to serve his jail time in increments of two months each year for the first four years of his probation sentence. Morton still has a portion of the jail time to serve, but Cupp ruled during sentencing Morton could serve his jail time on work release.
“We did have fantastic reports on him,” Ross said. “He was a tireless worker and had shown humility and honesty. He would put in hours beyond what was asked of him. We hope that ARM can be a place of rehabilitation and that a past problem will not be a kiss of death to someone’s future.”
Board member Don Steele said all applicants are now required to submit to a background check, and Jones added that she had one completed when she was reinstated as director.

The United Way of Elizabethton/Carter County is looking for some part-time help. Members of the United Way Board of Directors... read more