Board shifts public comment, calls for two readings on resolutions 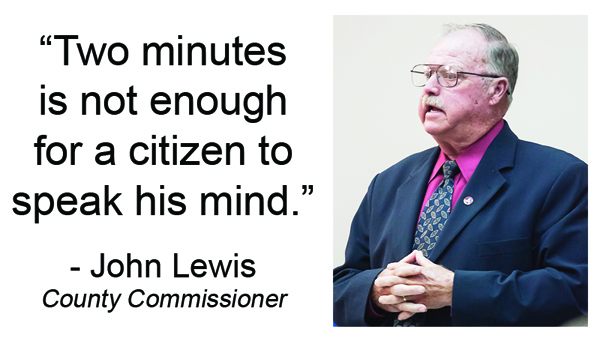 While Monday’s commission meeting was a first for a majority of the members, the commissioners did not shy away from business, addressing procedure for public comments, a measure to adopt a resolution setting building codes and a decision to require multiple readings of resolutions.
Commissioner Nancy Brown took the first action, making a motion to amend the agenda and move the public comment section to the beginning of the meeting. Her motion was seconded by Larry “Doc” Miller and passed on a vote of 20-4, with commissioners Al Meehan, L.C. Tester, Timothy Holdren and Sonja Culler casting dissenting votes.
Some of the issues brought up by residents during the public comment segment of the meeting were later addressed.
Don Johnson, who said he has experience as an engineer and with construction, questioned the commission’s resolution to approve building codes and asked members to carefully consider it before voting.
Resident Roy Livingston requested the commission to set a procedure of having multiple readings on resolutions before holding a final vote, noting many surrounding county and city governments hold multiple readings before voting. Currently, the commission holds only one reading on resolutions before voting, Livingston said
As part of the commission meeting, a public hearing was held on the proposed building codes. During the public hearing, Johnson spoke again and said, while he supports the county in adopting building codes, he feels the commissioners should know what they are voting on. He asked the commissioners to use “due diligence” in their research and reminded them “you can’t selectively enforce pieces of the code you adopt.”
County Historian Scott Bowers also spoke regarding the building codes, saying he has concerns because the code did not address historic designations for homes and other buildings. He said enforcement of building codes on historic buildings could cause the loss of the designation as historic.
“I would like to see a workshop for you guys given by someone qualified to explain these changes,” Bowers said.
After the public hearing, Planning Director Chris Scheuttler spoke to the commission and said he agreed a workshop would be appropriate to help introduce the new commissioners to the proposed changes to the building codes. The original proposal came before the full commission in November 2013, but Scheuttler said it was tabled at that time.
Commissioner Ronnie Trivett made a motion to delay the vote on the resolution until the commission could hold a workshop to become better educated on the proposed changes. The motion received a second from commissioner John Lewis and passed unanimously.
During the portion of the meeting for commissioner comments, Lewis said he felt the commission needs to give more consideration to the measures it votes on and he made a motion which would require the commission to have two readings on resolutions. He also recommended, that before holding a final vote, the commission should meet with the county attorney to get an explanation of the resolution. His motion was seconded by Trivett.
Carter County Mayor Leon Humphrey and Finance Director Ingrid Deloach cautioned the commission that some matters that are brought up are time sensitive and require a vote before two readings could be held.
The motion by Lewis passed on a vote of 16-8. Commissioners Jerry Proffitt, Nancy Brown, Mike Hill, Meehan, Beth Depew, Trivett, Charles VonCannon, Isaiah Grindstaff, Holdren, Randall Jenkins, Lewis, Larry “Doc” Miller, Scott Simerly, Robert Carroll, Robert Gobble and Cody McQueen voted in favor of the motion. Commissioners Willie Campbell, Tester, Danny Ward, Ross Garland, Bobbie Gouge-Dietz, Culler and Ray Lyons cast dissenting votes.
Earlier in the meeting, Lewis proposed changing the policy limiting public comments to two minutes and only to those items that are on the agenda.
“Two minutes is not enough for a citizen to speak his mind,” Lewis said, adding he also felt the subject should not be limited to those items currently on the agenda.
Lewis made a motion to expand the time limit to five minutes and remove the limitation on subject matter. The motion was seconded by Brown. The motion was amended by Von Cannon, who added a provision to move the public comment portion of the meeting to the start to allow citizens the chance to speak before the commission voted on issues.
The motion by Lewis failed on a vote of 13-11, with Campbell, Peters, Proffitt, Hill, Meehan, Depew, Grindstaff, Tester, Garland, Gouge-Dietz, Holdren, Jenkins and Culler casting votes against the motion.
Following the failed motion by Lewis, Trivett made a motion to refer the regulations on public comments to the rules and bylaws committee for review. The motion was seconded by Ward and passed on a vote of 22-2, with Lewis and Miller casting the dissenting votes.