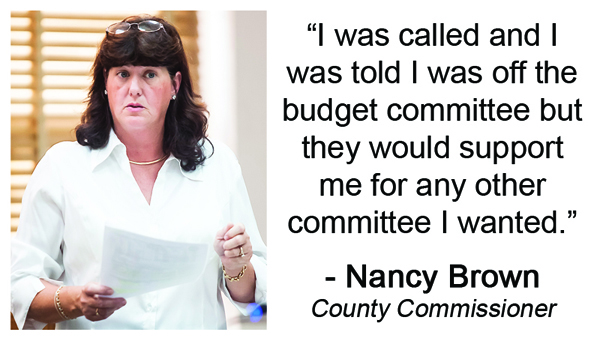 Committee appointments were approved by the County Commission amid some controversy and a familiar face returned to the position of chair of the Commission.
During the public comments portion of the meeting, resident Sherman Knack questioned the removal of Commissioner Nancy Brown from the budget committee. Following his comments, Brown asked to be allowed the opportunity to speak. She also questioned her removal from the committee, and the way in which she was removed.
Brown said members of the commission were told to get together with the representatives of their district and decide among the three of them who would serve on which committee.
Brown, who represents the Second District, said she was notified of a meeting with Mike Hill and Al Meehan, her fellow Second District commissioners, but she was unable to attend due to an illness.
“I was called and I was told I was off the budget committee but they would support me for any other committee I wanted,” she said, adding, “I don’t intend to lay down and take this.”
According to Brown, who has been a member of the commission for eight years, the process of allowing the district representatives to decide among themselves is not the process that had been used during her years of service. She said previously the top vote getter in each district was appointed to the budget committee.
Commissioner Sonja Culler, who presided over the early part of the meeting, told Brown the process of allowing the district representatives to decide appointments among themselves had been used for the past two years, to which Brown retorted “Yes, when you kicked Scott Sams off the budget committee.”
Culler said the process used by the commission is part of the rules and bylaws. “Majority rules,” she said. “That is the rules and bylaws of this commission.”
Brown said she still disputed the process and felt she was better qualified than either Hill or Meehan to serve on the Budget Committee.
Culler called for a five-minute recess to allow Brown, Hill and Meehan to hold a conference regarding the appointments in private before returning to the full commission with a decision. When the three commissioners returned from their conference, Culler said the matter would be brought up when the Commission reached the committee appointment portion of the agenda.
Before the committee appointments came back up on the agenda, members of the commission had to select a new commission chair and vice-chair. Culler, who was vice-chair of the previous commission, presided over the start of Monday’s meeting because the previous chair Tom Bowers did not return to the commission.
Commissioner John Lewis nominated Carter County Mayor Leon Humphrey for the position of chair and Commissioner L.C. Tester nominated Culler.
On a vote, Humphrey was elected to serve as chair of the commission by a vote of 13-10, with Culler passing on the vote. Humphrey then took over as chair and presided over the rest of the meeting.
After the election of chair, the commission moved on to the position of vice-chair. Commissioner Buford Peters was elected vice-chair by a margin of 16-8 over Commissioner Charles Von Cannon.
After the election of vice-chair, Humphrey addressed the commissioners of the Second District and asked if they had worked out the committee appointments.
“I am still not in agreement with them,” Brown said. “I would like to see it come to a floor vote.”
Humphrey conferred with the County Attorney Joshua Hardin, and then asked for a public voice vote from Brown, Hill and Meehan whether they approved the proposed committee assignments, placing Hill on the budget committee, Meehan on the rules and bylaws committee and Brown on the highway committee.
Hill and Meehan voted to approve the appointments and Brown voted against the appointments.
The appointments for the second district passed on a majority vote of 2-1.
Members of the commission were then asked to vote to approve the list of appointments for all eight districts. The appointments were approved on a vote of 14-10. Commissioners Willie Campbell, Peters, Hill, Meehan, Beth Depew, Isaiah Grindstaff, Tester, Danny Ward, Ross Garland, Bobbie Gouge-Dietz, Timothy Holdren, Sonja Culler, Ray Lyons and Cody McQueen voted in favor of the appointments. Commissioners Jerry Proffit, Brown, RonnieTrivette, VonCannon, Randall Jenkins, Lewis, Larry “Doc” Miller, Scott Simerly, Robert Carroll and Robert Gobble voted in opposition.
At the end of the meeting, during commissioner comments, Brown once again addressed the group regarding the appointments.
“I didn’t get the committee I wanted, but I am past that,” she said. “Let’s work together.”