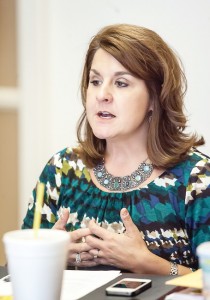 The United Way of Elizabethton/Carter County is looking for some part-time help.
Members of the United Way Board of Directors have discussed the search for a part-time employee to keep the office open during the search for a full-time director.
Currently, United Way board members and former director Debbie Guy are working in the office to answer messages and complete invoices. Guy’s last day at the United Way was Aug. 28.
United Way President Candy Craig said the group is interviewing prospects and plans to hold a second interview with the top two candidates Wednesday, Sept. 24.
Board member Greg Bowers said four candidates were interviewed last week, with two of those being good prospects for the job. Additional individuals were interviewed Monday.
“We plan to narrow it to two candidates and have those two appear before the board,” Bowers said.
In the meantime, Craig said the agency needed a part-time worker to be in the office about 20 hours a week to help with the day-to-day business that came to the United Way.
She said a candidate had been lined up for the part-time job and was scheduled to start work Monday, but she received an email Sunday from the person telling her they could not take the job.
Craig said of the other possible candidates, they needed to give a two-week or four-week notice with their current employers.
“We can’t have a month’s wait time,” she said.
She said the work for the position was not “complicated” but was just keeping the office open. In the last week, the office received 54 voicemails that board members had to return. The board is also paying Guy for her hours she puts in to complete invoices while they search for a new director.
The part-time job would be from 10 a.m. to 2 p.m. and would be guaranteed until the end of December.
Craig encouraged the board members to think of qualified applicants who would be good for the position that could start quickly.
The board also discussed the campaign kickoff held last week. Campaign Chair Chris Hitechew said he would have liked it if more people, including representatives from the agencies, had attended.
“Overall, it was a good kickoff,” he said.