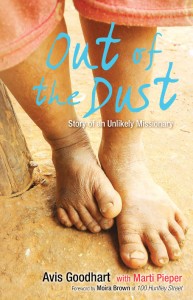 Missionary, teacher and now author Avis Goodhart, founder of Go-Ye Ministries, has dedicated her life to helping others. Now she has written a book titled “Out of the Dust, Story of an Unlikely Missionary” to share her story.
That story was compelling enough to draw an Elizabethton woman to Pacasmayo, Peru, to serve at Casa de Paz, a school, church and orphanage Goodhart founded there.
And now, she’s bringing her story to Carter County, where she will share it at Calvary Baptist Church on Sept. 21.
“I want to share with people that you don’t have to be ‘special’ to be used by God,” Goodhart said. “There are so many people that go to church and love God, but there is something in their past or they feel they are unworthy so they never get out of the pew. There is no one any more unlikely to be a missionary than me. If God can use me, He can use anyone.”
“Out of the Dust” tells Goodhart’s story starting as the oldest child in her family living in the Midwest, through her time as a teacher and part-time missionary to today, living in Peru operating Casa de Paz. Each chapter ends with an interview with Goodhart’s family or friends for their perspective on the story that was shared by Goodhart in that section of the book.
Goodhart said she had an “unusual childhood.” Her father was a World War II veteran who suffered from what is now recognized as post-traumatic stress disorder.
As a result, he would move his family of seven children around frequently. She said they would stay in a variety of places from Salvation Army shelters to nice homes over the course of the years.
She said she also experienced other hardships in her life, like being molested at a young age by a family member, but learned to let God use those situations for an overall good.
“God has taken that and reshaped it and used it to get me ready for my life now,” she said. “I tell people don’t waste your pain. Whatever has happened, good, bad or ugly, give it to God and let Him reshape it and use it for good.”
Goodhart became a teacher and went on her first mission trip in March 1997 with her church to Honduras. While on that trip, she learned of a group of women and children in Peru trying to start over after having to run from a war between the local government and drug lords in the country.
On a trip in November 1997, she met with about 800 families that had been given very small plots of land in the city dump to rebuild their homes. She said she talked with women who said they had made the decision to prostitute themselves to make sure their children had enough food to eat.
“When I thought about it, if I saw my children starving, then there go I,” she said. “They were trying to make homes in rough situations. I thought about it, and what we needed to give them was hope. They were totally defeated and needed to rebuild some of that self-esteem. What these women needed was a chance.”
She continued to visit on regular mission trips. Then circumstances in her life began to change. In 2002, her husband died after a short battle with cancer and she had to retire from teaching after being diagnosed with Bell’s Palsy.
After taking some time to cope with the disease, Goodhart was urged by her doctor to get out of her house and start interacting with the public again.
“He told me to get out and go,” she said. “He meant shopping, but I was thinking mission trip.”
While she was home with her husband, her brother visited Peru and bought some property that would become the church in Casa de Paz. In 2003, she started building the church with money loaned to her by her brother. In 2005, she opened the orphanage and in 2008, the school was added to the ministry compound.
The ministry operates through donations and volunteers, but the school also accepts tuition students, which helps pay for the education of the children in the orphanage.
Casa de Paz has drawn the attention of many missionaries, including Tammy Dicken of Elizabethton, who moved there last year to be a nurse and teacher.
Goodhart does not take any credit for starting the ministry, saying it is all the work of God using her as a vessel to complete His will.
“God started it,” she said. “All I had to do was to trust him when He told me to go. All we have to do is love God and love people. The rest doesn’t matter. The Holy Spirit is with us as we go. We should be out there, loving people for Jesus because that is how people know who we are, by the love we share.”
All money raised from the sales of the book go back into the operating fund for Casa de Paz, Goodhart said. The book is available in both paperback and e-edition at amazon.com. Preorders are being taken for the paperback editions that will be available in about a month.
Goodhart will be at Calvary Baptist Church at 225 Holly Lane, Elizabethton, on Sunday, Sept. 21, at 6:30 p.m. to share her story.
For more information on Go-Ye Ministries, visit www.goye-ministries.com.

Committee appointments were approved by the County Commission amid some controversy and a familiar face returned to the position of... read more