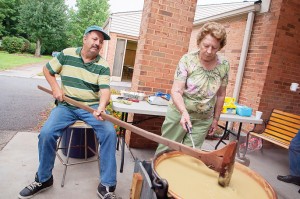 The smell of apples, cinnamon and sugar filled the air Tuesday morning at the Elizabethton Senior Citizens Center.
It was kick-off day, the first of three apple butter making sessions the Center will have this fall.
Volunteers got an early start, gathering at 5 a.m. to begin the process. Working in teams, volunteers stirred the apple butter boiling in big kettles set up in the center’s parking lot.
Making the fall delicacy takes a lot of time and hard work, but is there a secret to making a batch that is better than the rest?
“There is no secret,” said Larry Smith. “It is just a lot of sugar and hard work. It is just cooking it.”
For years, the center used apples that were peeled and sliced. To streamline the process, the center now uses applesauce. Other than that, the method is the same.
The applesauce is placed into large kettles and boiled to reduce the water in it. Then, sugar is added and the boiling continues until it is thickened. Cinnamon is added to the mixture and then it is cooked and stirred until finished.
“When it is finished – five to six hours later – you have apple butter,” Smith said.
For volunteer Herman Colbaugh, making apple butter is a familiar process.
“I’ve stirred apple butter all my life,” Colbaugh said. “I used to make it when I was little.”
Not all of the work was taking place outside the center. Inside, a group of volunteers were readying the jars with lids and ribbons for the finished apple butter.
By the end of the day. the volunteers will have made more than 100 quarts of apple butter, Senior Center Director Kathy Dula said.
“They’ll be making apple butter from 5 a.m. until around 3 p.m.,” she added.
The apple butter will be sold from the center as a fundraiser to help with the budget, Dula said, noting the center is responsible for raising 15 to 20 percent of its overall budget.
“This and our breakfasts are our two big fundraisers,” she said. “This helps a whole lot. Everyone enjoys doing it, too. It brings everyone together and they talk and fellowship all day.”
On average, the center raises around $2,500 from the apple butter sales.
Volunteers will continue to make apple butter for the next two Tuesdays. The apple butter can be purchased at the center for $6 a pint or $10 a quart.
For more information call 543-4362.

Committee appointments were approved by the County Commission amid some controversy and a familiar face returned to the position of... read more