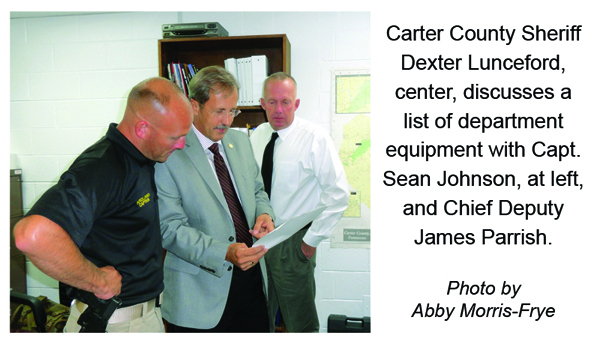 With the first few weeks of his new job now behind him, Carter County Sheriff Dexter Lunceford said his experiences have been positive and he is working with the staff to make the department even better than it already was.
“I’ve had absolutely nothing but positive comments from everyone, including the inmates,” Lunceford said.
Lunceford said he has had meetings with most of the department’s staff and has gone through every block in the jail speaking to the inmates. He said he has been pleased with the response he has received from the staff so far.
“I was surprised,” Lunceford said. “I thought I was going to meet a lot more resistance from the staff than I did.”
“Everyone is willing to do whatever they can to move this department forward,” he added.
One of the first major tasks Lunceford has faced has been completing a staffing analysis to best determine how to utilize the department’s employees.
“You have to assess people as you talk to them,” he said, saying he feels it is important to determine people’s strengths to find the best fitting position for them.
Lunceford said the staffing analysis he and Chief Deputy James Parrish have been working on has been moving “slowly and deliberately” so they can be assured they are taking the best course of action.
“Before you can determine where you are going, you have to determine where you are at,” he said.
One of the things the new sheriff has encountered is the proportionately large number of individuals in the department who hold rank. Lunceford said, in the past, promoting officers to those ranked positions had been used as a way to give raises to employees.
This practice has created a “nightmare from a management standpoint,” according to Lunceford, because once an employee is promoted, they carry that rank with them if they are transferred within the department.
According to Lunceford, the practice of using promotions to give raises also skewed the department’s ratio of supervisors to employees. In some cases, he said, one supervisor was overseeing only two or three employees. In the case of the patrol shifts, that ratio in some cases is 1:1 with each patrol shift having one lieutenant and one sergeant overseeing two patrol officers.
Lunceford said he and Parrish are looking at ways to get the ratio back in line.
“Those are problems that I expected and we are working on them slowly but surely,” Lunceford said.
Employee retention another issue Lunceford is focusing on early in his administration.
“If you don’t retain officers, then we are spending the taxpayers money to train officers for other agencies,” he said, adding the department can’t build its experience level without good employee retention. “Ultimately I would like to see officers from other agencies apply here and bring that experience here.”
Lunceford said there is more than one issue that affects the department’s employee retention rate.
“It’s not all pay, but that is part of it,” he said. He noted he will be working to reinstate the pay scale step raises while keeping within his approved budget.
The benefits package offered to county employees can also have an effect on employee retention, Lunceford said.
He cited the cost of family coverage insurance for the department’s employees – $1,258 per month – a plan he says is so expensive the employees can’t afford it.
The starting salary for a corrections officer is $21,320 per year – or $1,777 per month – before taxes. If a starting level corrections officer purchased the family coverage insurance, his or her leftover pay for the month would be $519 before taxes.
Lunceford also said he will be working to develop more trust within the department – another issue which he says can affect retention. The staff needs to be able to trust their management, he said, adding “I think there was a void there before.”
Just three weeks into his administration, Lunceford has already delivered on a promise he made during his campaign – increasing patrol numbers.
The department has added one additional officer to each of the four patrol shifts by using existing personnel, Lunceford said, bringing each patrol shift up to five officers.
“We will continue to increase those numbers through the reassignment of existing personnel to improve that response time,” he added.
The sheriff said he appreciates the public’s patience as he works through the changes to the department.
“In the long term we will eventually be able to provide much better service to the citizens of this county,” Lunceford said. He said that anyone who has a concern, compliment or complaint can speak to him either by coming by his office or by calling him.
“My door is open. I do work for the people of this county,” he said. “It may take me a little while to get back to you but I will.”

A legal opinion issued Wednesday by the Tennessee Office of Open Records Counsel says members of the County Commission may... read more