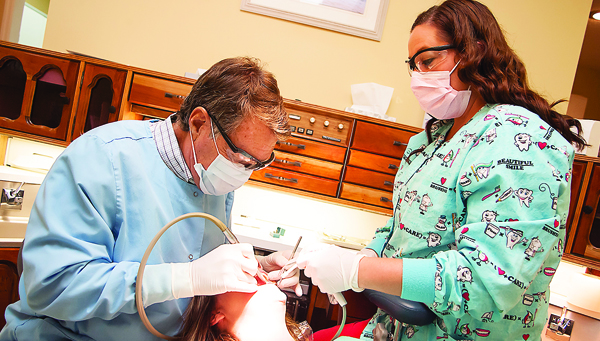 Photo by Brandon Hicks
Dr. Jack Holly and Sandra Smith do a checkup on Angie Clark.

Treating patients like family.
That is how Dr. Jack Holly and his office staff operate each day. Their dedication to their patients has won them the title of best dentist by the readers of the Elizabethton Star in the annual Reader’s Choice Awards.
“I am honored that they chose me,” Holly said. “Our patients are one big family of friends. When you start your practice, everyone starts as patients but over the years they become friends.”
Holly has been practicing dentistry for 38 years and says he loves what he does.
“It is a love for my patients that keeps me in dentistry,” he said. “I enjoy what I do today as much as I did the day I started.”
Holly earned his bachelor’s of science degree from East Tennessee State University and graduated from the University of Tennessee Dental School in 1976. The same year, he opened his practice in Elizabethton.
Holly knew from his junior year in high school that he wanted to be a dentist.
“I liked science, math and chemistry and I kid and say ‘I couldn’t sing or dance so I’ll be a dentist,’” he said.
He has been awarded the “Best Dentist” award in 2007, 2010, 2012, 2013 and 2014. The secret to winning best dentist multiple times? Holly says that’s all in how you treat the patients.
“We strive to treat everybody like they are part of the family and provide the best quality dentistry we can,” Holly said. “We work to be kind, competent and friendly to the patients.”
Holly credits his staff for the success of his dentist practice.
“I have been blessed with a great staff,” he said. “It is the girls that keep me on track.”
Office staff include co-office managers Angi Clark and Katie Witten; dental hygienists Megan Rocket, Christa Shannon and Anna Rose and dental assistants Amanda Haney and Sandra Smith.
Holly said he stays focused on continuing his dental education. His next goal is to reach his 50th year in office to be recognized by the Tennessee State Dental Society.
“Every year they recognize the dentists that have been in practice for 50 years,” he said. “That is a goal of mine if the Lord continues to bless my health.”
Holly has been married to his wife Peggy for 44 years. They have two sons and five grandchildren.
Holly’s practice is located at 417 Hudson Drive.