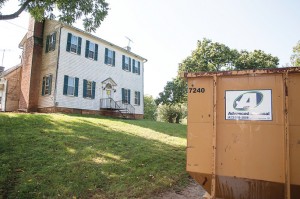 One of Elizabethton’s most historic homes is being restored to its former glory.
Once the restoration is complete, the house will become a part of the Sycamore Shoals State Park system.
Work on the restoration project at Sabine Hill house officially began Sept. 3, but Sycamore Shoals State Park Manager Jennifer Bauer said work has gained momentum in the past week.
Bauer said crews have established power to the home and installed barrier fencing at the site. Also, the roadway, parking lot and sidewalks to the home had been marked off and graded out.
She said crews have also been working inside the house as time permits to clear out some of the more modern appliances and furniture that had been left behind by former owners.
“The goal is that by Sept. 29, we will have the interior of the house exposed so that the experts can get in there and do more research on exactly how old the home is,” Bauer said.
In the past, preservation and restoration crews have visited the home and have given estimates on how old the home is, but were not able to get a clear picture because newer wall coverings, such as paneling and wallpaper, had been in place blocking the view of the house’s structure, including the original beams.
Once the structure’s support structure is exposed, preservation experts including a historic paint specialist will visit to take more samples of what paints and wall coverings were used. Bauer said this data will help pinpoint the exact age of the house.
“One question we have is exactly how old the house is,” Bauer said. “What passes for legend is not always true. The general story is that after Nathaniel Taylor’s death, his widow, Mary, lived until sometime in the 1850s and completed the home. It is not real clear when the home was completed.”
Bauer said these examinations by the experts will give better data on when the house was built, which will help the restoration process be more accurate and will help answer some of the questions the group has about the home.
“This will help us understand how the back part of the house fits in with the main part and what kind of colors and finishes they would have had in the home,” she said.
Bauer said after all the data is collected, the restorers, contractors and other people involved will take a small break from working to meet and discuss the findings. They will then decide how the interior of the home should be finished.
Before that can happen, Bauer said the structure needs to be secured before cold weather sets in. This process includes restoring and replacing windows, improving and restoring the roof with wood shake shingles and restoring the siding to protect the inside from the elements.
“We have to take care of all of that before we can even start on the interior,” she said. “Sabine House is going to be amazing. It will be a real treasure when it is finished.”
According to local legend, the home was built in the early 1800s by Nathaniel and Mary Taylor. The home originally stood on 3,000 acres of land. The home stayed in the Taylor family until the mid-1900s. It had several other owners before the state bought the home to restore and turn it into a historic site.
The Taylors maintained ownership of the house until the mid-1900s. The home was purchased by James Reynolds in 1949 and was placed on the National Historic Register in 1973. Reynolds owned the house until 2002. Art and Vivian Eckerson bought the historic home at auction in 2003. The Eckersons put the home back on the market and it was then that it drew the attention of the developer who intended to buy it in 2007 and demolish it to build condominiums. Instead, Elizabethton residents Helen Wilson and Sam LaPorte bought the home to save it from demolition and then sold it to the state in 2007.
After the state bought the home in 2007, the property sat relatively undisturbed for around five years.
The economic downturn slowed the restoration of the property and funding for the project was not included in the state budget until 2012, when the $1.1 million restoration budget was appropriated and some work on the home began including an archeological study.

West Side kids have a blast with the past

Students from West Side Elementary took a trip more than 200 years back in time Friday. The students were transported... read more