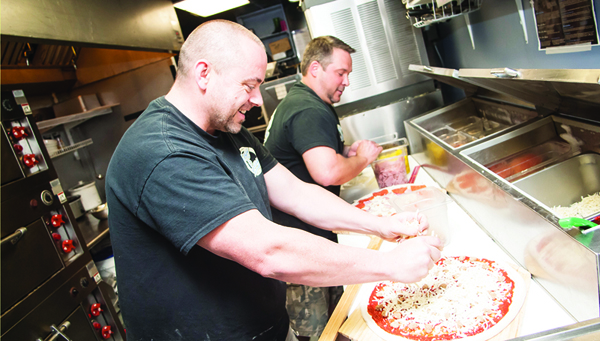 Photo by Brandon Hicks
John Seehorn, left, and John Malone work hard in the kitchen at Jiggy Ray’s making pizzas. Last year the best friends experienced a dream come true when they opened their own restaurant.

What started out as a dream shared by two best friends turned into a reality just under a year ago.
Best friends John “Bull” Malone and John Seehorn said opening a pizzeria has been a dream of theirs for more than 10 years. Over the years, they said, they would see something they would like at another restaurant and would make note of it.
When the time came to make their dream a reality, they took bits and pieces of the things they liked at other restaurants over the years and combined it all together to make a place that is truly unique.
That’s how Jiggy Ray’s was born.
And, just 10 months after opening their doors, the community has shown its love for Jiggy Ray’s.
Each year, the Elizabethton Star holds a Reader’s Choice Awards contest which allows readers to vote for their favorite local businesses, restaurants and professionals.
For 2014, Jiggy Ray’s claimed the top prize for Best Restaurant / Pizza — a recognition that both surprised and honored the best friends.
“We were thrilled,” Malone said of learning the restaurant had won. “We didn’t even know the voting was going on.”
According to Malone and Seehorn, what sets Jiggy Ray’s apart is the atmosphere, dedication to providing great customer service and paying attention to the little things that make a big difference.
“Your employees are the face of the business,” Malone said. “They have to believe in what you are doing as much as you do.” He added he is proud to say that in the 10 months the restaurant has been open not a single employee has quit. “From the kitchen staff to the wait staff we have the absolute best employees.”
Having a great staff is essential to success, Malone said, adding the staff at Jiggy Ray’s take pride in making the customers feel at home.
“We want people right when they walk in the door — whether it is their first time or they’ve been here 100 times — we want them to feel welcome,” Malone said.
Part of providing customers the best experience possible is focusing on the quality of the food you serve, Malone and Seehorn said.
The restaurant seasons and mixes its own sauce, blends their own cheese, makes their own beer cheese, and the items on the salad bar do not come out of a bag. They are cut fresh every morning.
“When you are cutting everything fresh every morning it is going to taste better,” Seehorn said.
One of the other “little things” the two men decided to do was import the flour used to make the pizza crust — known as Antimo Caputo flour — from Italy.
“It’s twice as expensive but it makes such a difference,” Malone said.
Seehorn agreed the quality of the ingredients impacts the finished product.
“If you want to be the best pizza you have to use the best ingredients,” Seehorn said.
With so much to choose from on the menu at Jiggy Ray’s, what is the favorite of the two owners?
Malone said his favorite is the Itappalachian Meat Mountain pizza, which features “more meat than a cattle drive” according to the menu. The pizza comes with pepperoni, sausage, hamburger, bacon and slow smoked pull pork, which is actually smoked on site. What is Itappalachian you ask? It is where Italy and Appalachia meet.
Seehorn said it is hard for him to pick just one favorite.
“There is enough variety to have a different favorite every day,” Seehorn said.
Malone and Seehorn said not only have they received a tremendous amount of support from their customers, but also from other area restaurant owners who have assisted them with information and advice along the way.
“We have been so fortunate to have the support of the community,” Malone said.
The two men said they do not view other restaurants as competition.
“We don’t compete with anyone,” Seehorn said. “If you pay attention to what everyone else is doing you can’t focus on what you are doing.”
Instead, the two men said they see the restaurants as working together to make Elizabethton better.
Jiggy Ray’s is located in downtown Elizabethton, and Malone and Seehorn say that is exactly where they want to be.
“We wanted to be in downtown Elizabethton from the get go,” Malone said, adding some people thought locating the restaurant downtown was a bad business move. “We have a vision for what this downtown can be.”
“Elizabethton has so much to offer and the downtown has so much potential,” he added. “Downtown has life again and that is what we want.”
For the crew at Jiggy Ray’s, part of bringing life back to downtown has been the live bands which are featured at the restaurant. With performances most nights of the week, there is as much variety in the styles of music as there is on the menu.
“We have had some extremely talented people come here and play on our stage,” Malone said. “They basically play for tips.”
Some big events are on tap for the coming months at Jiggy Ray’s. On Sept. 26, Elvis impersonator Matt “Elvis” Dollar will be in concert.
Then, on Sept. 27, the restaurant will celebrate October Fest with the first ever Jiggypalooza Outdoor Music Festival. Jiggypalooza will feature outdoor concerts and an outdoor beer garden.
Jiggy Ray’s is also planning a special Halloween concert which will, of course, feature a costume contest.
For more information on Jiggy Ray’s you can visit them online at www.JiggyRays.com and check them out on Facebook.

Photo by Brandon HicksDr. Jack Holly and Sandra Smith do a checkup on Angie Clark. Treating patients like family. That... read more