Principal: West Side Elementary is a ‘fantastic school’ 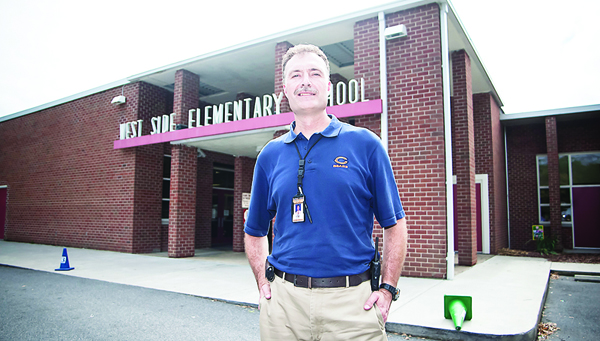 West Side Elementary is a land flowing with milk and cookies.
At least that is the way principal John Wright sees it.
And it comes as no surprise to him that West Side Elementary was selected as the best elementary school by Elizabethton Star readers in the Reader’s Choice Awards.
“It is a fantastic school,” Wright said. “We have tremendous parents. The teachers work hard. The students work hard. Everyone has a lot of pride in their school.”
Along with that pride comes a strong sense of community support which Wright said lends itself to the success of the school.
“I can’t say there is any one thing that makes this school the best,” Wright said. “We have a strong community network. The parents and students are really connected to the school and want it to be the best it can be.”
Wright said the school continues to do well in testing, benchmarks and other indicators of student learning and achievement. He said while those are all positive things, the most important factor for the school staff is student learning.
“We have multiple goals for the school year,” he said. “We don’t want to get so focused on testing and teaching that we forget about learning. If we teach and teach, but the students aren’t learning, then what good is it?”
To make sure that West Side students are learning what they need to progress to the next level, Wright said there is a process they follow for each lesson.
First, the teachers have the information is that they need share with the students.
After the lesson, they do a review to see if the students learned that new information, and if they did not, then they change the focus of their methods to make sure the students learn what they need to when it is gone over again.
Reading is one of the main areas of focus this year for West Side students. Wright said education experts have repeatedly shown that if a student can read well then that will transfer over to success in other subjects as well.
“We have rearranged the schedule so that we read every day, in every class for every student,” Wright said. “Students are to read each night and keep a journal of what they read. If students read well they will have an advantage in other classes. We set high standards for our students and we have high expectations.”
Parent support helps those students meet the academic standards, and helps students excel in extra-curricular activities.
“Parents are really involved in their students’ academic work,” Wright said. “It is the high parent involvement that makes it a great school.”
Wright also described the West Side school community as generous.
As an example, he said the school recently participated in the Ice Bucket Challenge after a student challenged Wright. He, in turn, challenged the school to bring in donations. After all the donations were collected, the school had raised $2,500 for ALS awareness and research.
The school also regularly holds fundraisers for Second Harvest Food Bank and the Elizabethton/Carter County Animal Shelter.
“Anytime we have a fundraiser, the hall is filled with donations that the students bring in,” Wright said. “That just shows their generosity. Anything we do is that way.”
For Wright, the best part about being the principal of the public-selected best elementary is the students.
“By far, the best part of the job is connecting with the students,” Wright said. “The students are so loving and caring. They make me feel good everyday. I have been here for two years and I love this place. I think it is a good fit.”
One of the favorite parts of his day is when he holds a reading group in his office for students who ride a late bus or are waiting for parents to come pick them up.
“It is not something we do everyday, but the students expect it,” he said. “They will come up to me and ask if we are going to read today.”
Wright became principal of West Side in 2012. Before that he was a sixth-eighth grade math teacher, an assistant principal and athletic director at T.A. Dugger Junior High School, and principal at Elizabethton High School.

Photo by Brandon HicksFood City is located in the Village Shopping Center on Broad Street. The company states on the... read more