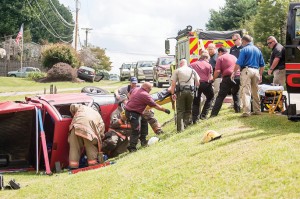 Two people were transported to the hospital Friday afternoon after their truck flipped in an accident on Watauga Road.
Emergency crews were dispatched to the accident in front of Fairview Baptist Church around 12:30 p.m. Friday.
Tennessee Highway Patrol trooper J.D. Gregory said the accident occurred when Jessica Dollar, 25, of Mountain City, was driving north in a 2014 Hyundai Elantra and crossed the center line on Watauga Road, also called State Route 400, and struck the rear driver’s side of a 1994 Chevrolet S-10 with two passengers.
Gregory said the impact knocked the truck from the roadway and into the grassy roadside, where it flipped.
He said the Hyundai lost steering power and continued on until it stopped in the flowerbed of a home near the crash site.
Gregory said the accident was caused when Dollar “took her eyes off the road” to hand a drink cup to her 2-year-old child who was in the backseat. Gregory said Dollar will be charged with driving left of center and failure to exercise due care.
The identification of the passengers in the truck was not immediately available because they were transported to the hospital before the THP arrived on the scene.
Carter County Sheriff’s Department Officer Michael Bean said the passengers in the truck did not appear to be seriously injured.

Some customers with the Elizabethton Electric Department will experience a brief power outage next week. Marketing and Industrial Services Coordinator... read more