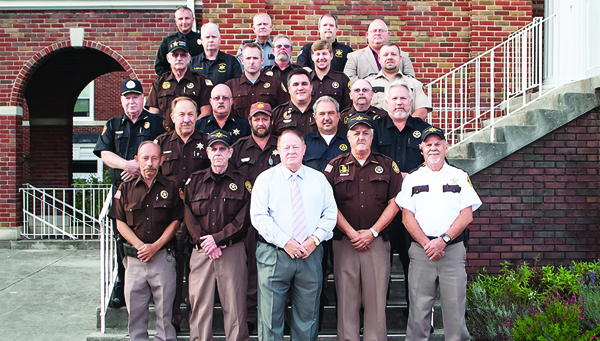 Photo by Brandon Hicks
Carter County’s constables completed their annual training requirements this past week. A graduation ceremony was held for the group on Thursday evening. The constables are shown here with some of their trainers and several guests from surrounding counties who attended the training as well.

One section of Carter County’s “thin blue line” graduated from their annual training program this past week.
The 16 elected constables for Carter County’s eight districts took part in a 40-hour in-service training program. For the new constables it was the first step in their attaining their state certification for their elected role and for the returning constables, it is one of the requirements of maintaining their certification.
The Carter County Constables Association organized the training event held at First United Methodist Church in Elizabethton. Ken Potter, a former chief deputy at the Carter County Sheriff’s Department and Chief of Police in Watauga, was the primary instructor for the training. Additional classes were taught by Jerry Stout, from the Department of Homeland Security; local attorney Jim Bowman; and Tennessee Highway Patrol Trooper Eddie Tester.
According to Stout, the topics covered during the training sessions dealt with a variety of law enforcement issues. He said he worked with Constable Mark Carrier, president of the association, to develop the topics they felt would be the most beneficial for the constables.
Among the topics covered were conducting traffic stops; emergency vehicle operation and control; use of force; Miranda rights; interview and interrogation skills; crime scene processing; and terrorism.
During the graduation ceremony Thursday, many of the constables expressed their satisfaction with the classes and the training they received.
“In my 45 years in law enforcement I have been through many classes and this one here is the best I’ve ever had,” said Constable John Henson, who serves the 6th District.
Constable Landon Pritchard, from the 1st District, agreed, adding he has also taken several classes instructed by Potter. “I always learn something new,” Pritchard said.
According to Carrier, the classes are beneficial to all of the constables, not just the newly elected ones. “If you’ve been a constable for a month or for 30 years you can get something out of this class,” he said.
For many, the training was not the only important part of the in-service.
“I’ve really enjoyed the last two weeks,” said newly elected Constable Ryan Presnell, who serves the 8th District. “Being a new guy, I’ve gotten to know a lot of people and I’ve learned a ton.
“It’s really neat getting to listen to the stories and experiences,” he added.
Presnell wasn’t the only one who praised the opportunity to meet and get to know the other constables in the county.
“It’s good to know who you will be serving with and who you can count on,” said Constable Mark Watson, recently elected to serve the 7th District.
Carter County’s elected constables are: 1st District Landon Pritchard and Larry Perry; 2nd District Leonard Johnson and Barney Brown; 3rd District James Bowers and Scott Whaley; 4th District Tim Lyons and Harvey Shaffer; 5th District Mark Carrier and Larry Presnell; 6th District John Henson and Bobby Trivette; 7th District Seth Babb and Mark Watson; and 8th District Bob Carroll and Ryan Presnell.
Constables serve as elected law enforcement officers and must complete state certification training. Because constables are elected and do not work within the sheriff’s department or police department they must purchase their uniforms, equipment and cruisers at their own expense.

With new option, owners ‘can’ afford to spay, neuter pets

East Tennessee Spay and Neuter helps hundreds of families and pets each month, and now the agency is offering another... read more