The Crossing: Overmountain Men to step into history once again 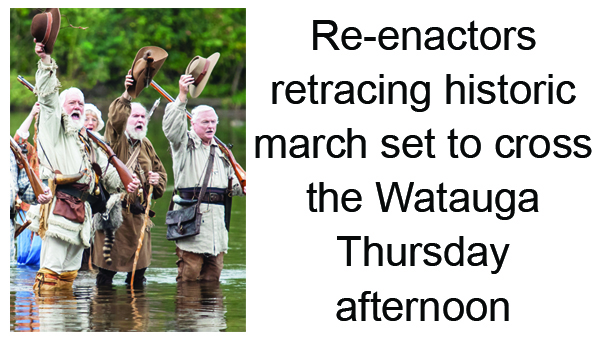 For two weeks each year, reenactors from the Overmountain Victory Trail Association retrace the footsteps of the heroic men who made the first march in 1780, teaching their tale of freedom along the way.
In the months leading up to the march, the British were fighting ferociously in North Carolina, including Loyalists under the command of Maj. Patrick Ferguson, who sent a message threatening to destroy the Watauga Settlement.
In response, Col. William Campbell of Virginia, Col. Isaac Shelby of Sullivan County and Col. John Sevier of Washington County (as Carter County was then known) established a camp of 840 men at Sycamore Shoals for the purpose of going to the relief of the colonists fighting the British in the South. The spot is now marked by a stone monument on West G Street.
They marched their men across the mountains, meeting Ferguson’s troops at King’s Mountain, S.C., Oct. 7, 1780. The Overmountain Men, as they were called, won a victory over Ferguson’s Loyalist troops and turned the tide of the American Revolution.
Members of the Overmountain Victory Trail Association have recreated this historic journey since 1975, following the same route and timetable as their legendary forebears. Marchers will cross the Watauga River Thursday, Sept. 25, at the Sycamore Shoals, as the frontiersmen would have done 233 years ago.
The approximate time of the crossing is 2 p.m.
The troops will camp overnight at the park, and early Friday morning will begin their trek across the mountain.
Before the militiamen set off, they heard a sermon by the Rev. Samuel Doak, one of the most prominent ministers of the early frontier. They will head up Gap Creek and camp at Roan Mountain State Park Friday night before crossing the mountain into western North Carolina.
The original militia encountered snow “shoe mouth deep” on top of the Roan. They also realized that they had two deserters that had left them to warn Ferguson that the Patriot militia was in pursuit. The others took the trail more traveled and went up to Carver’s Gap.
The reenactors will be treated to supper Thursday evening at Sycamore Shoals Park, courtesy of the local Daughters of the American Revolution chapters.

An Elizabethton man was charged after police responded to a city residence on a report of a male subject passed... read more