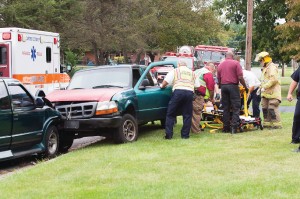 A man was transported to the hospital with minor injuries and is facing multiple charges after a single-car crash on Thomas Boulevard Monday afternoon.
According to the Elizabethton Police Department, Michael Lee Burrow, 37, 861 Highway 91, drove his 1998 green Ford Ranger into a parked 1996 green Chevrolet S-10 outside the home at 1238 Thomas Blvd. The crash happened shortly after 1 p.m.
EPD Officer Wayne Pritchard said Burrow is being charged with driving under the influence first offense, driving on revoked license first offense, possession of drug paraphernalia and violation of the financial responsibility law. Pritchard said a search uncovered syringes.
Pritchard said at the scene Monday afternoon the exact cause of the accident was still under investigation.
“We are still trying to figure out exactly what happened,” Pritchard said. “He was traveling west when he hit the parked vehicle on the side of the street.”
The S-10 belonged to Wayne Boeker, who lives at 1238 Thomas Blvd.
“I was in the house and we heard a boom,” Boeker said. “My wife said, ‘what was that?’ I looked out the window and my truck had been hit.”

An Elizabethton man accused in a series of October 28, 2013, drive-by shootings has been arrested on a local indictment,... read more