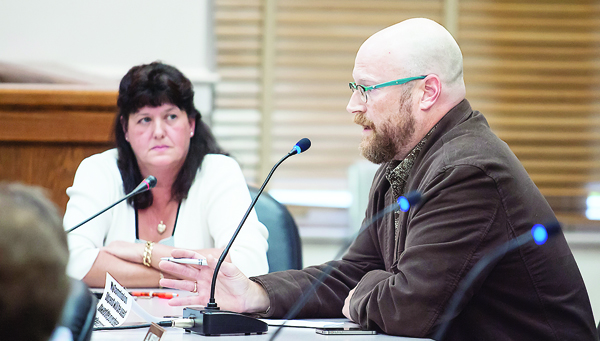 During a special called meeting Monday, members of the County Commission approved committee appointments with only two changes from the list previously approved by the governing body.
Carter County Mayor Leon Humphrey, chairman of the commission, told members the special called meeting was necessary to correct apparent violations of the state’s open meetings laws.
Humphrey said problems were brought to light when his office received a letter from the Office of Open Records Counsel following the Sept. 15 meeting where the commission originally approved the committee appointments. In that letter, attorney Elisha Hodge took issue with the process the commissioners used to decide the committee appointments as well as a private meeting between Commissioners Nancy Brown, Mike Hill and Al Meehan held while the full commission was in recess.
Humphrey said before the start of the term on Sept. 1, commissioners received a letter from then-chairman Tom “Yogi” Bowers directing them to discuss the committee appointments among the representatives of their district and decide who would serve on which committees.
During Monday’s meeting, Fourth District Commissioner Danny Ward asked, if the process violated state law, why did no one speak up at the meeting on Sept. 15.
Humphrey said he did voice his opposition to the process at that time but the commission continued.
Ward posed the same question to County Attorney Joshua Hardin, who replied the letter had been sent to commissioners before he took over as county attorney. “I had absolutely nothing to do with it,” Hardin said.
Commissioner L.C. Tester, also of the Fourth District, said most of the discussions between commissioners regarding the committee appointments took place before Sept. 1 when the commissioners took their oath of office. He asked Hardin if the commissioners had violated the law even though they had not yet taken their oath.
Hardin said while the new commissioners had not taken their oath and that fact might make a difference, the process of deciding the appointments was not the only complaint. There was also the issue of the private meeting held on Sept. 15 while the commission was in recess.
“To remedy all the possible violations, this meeting had to take place,” Hardin said.
Hardin noted while the letter from the Office of Open Records Counsel said apparent violations occurred, only a court would decide with certainty if state open meetings laws were broken. “To my knowledge, no lawsuit has been filed,” he added.
Humphrey said to rectify the apparent violations, commissioners from each district would be given an opportunity to address the full commission regarding their education, experience and any other qualifications and state their preference of committees. After each of the three members of the district had an opportunity to speak, Humphrey said the group would then be given an opportunity to discuss the appointments and vote on it publicly. He said if no clear majority was present in the district, the appointment would then come to a vote by the full commission.
During their opportunity to address the commission, many of the members brought up the discussions that had been previously taken place among the commissioners; some stated conversations had taken place in Murfreesboro while several commissioners were attending a training seminar.
The majority of the districts agreed on committee appointments when brought to a vote within their district, but the Second District had its appointments brought to a full commission vote after those commissioners failed to come to an agreement. Both Brown and Hill voted to place themselves on the budget committee. Their fellow Second District commissioner, Meehan, was not in attendance at Monday’s meeting.
After the vote by Brown and Hill showed a vote of 1-1, Humphrey called for a vote by the full commission to determine the budget committee appointee for that district. On a vote of 12-10, Brown was named to the Budget Committee with Commissioners Jerry Proffit, Brown, Ronnie Trivett, Charles Von Cannon, Randall Jenkins, John Lewis, Larry Miller, Ray Lyons, Scott Simerly, Robert Carroll, Robert Gobble and Cody McQueen voting in her favor. Commissioners Willie Campbell, Buford Peters, Hill, Isaiah Grindstaff, Tester, Ward, Ross Garland, Bobbie Gouge-Dietz, Timothy Holdren and Sonja Cutter cast their votes for Hill.
During the Sept. 15 meeting, Brown had been placed on the Highway Committee group while Hill had been placed on the Budget committee.
Following the vote, Hill said he would agree to place Meehan on the Rules and Bylaws committee group and he would take the Highway/Utilities committee group. The commission then voted unanimously to approve those appointments.
After all the districts were decided, the full commission voted 20-2 to affirm the committee appointments, with only Tester and Culler casting dissenting votes.