For sale: A heaping helping of history 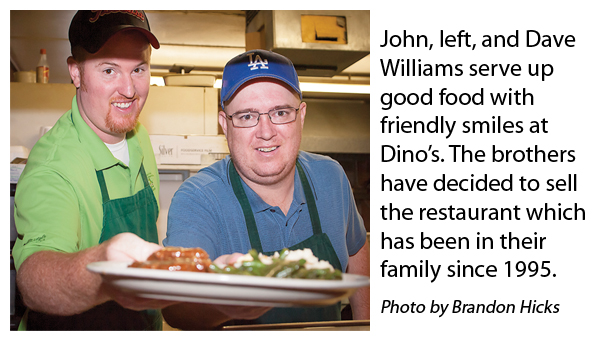 For Sale: “Turnkey restaurant operation with a prominent place in local history.”
For more than 50 years, Dino’s has been a fixture in downtown Elizabethton as generations of Carter Countians have taken a seat at one ofthe local eatery’s tables to enjoy good food served by friendly faces.
And for only the second time since the restaurant was established, it is for sale.
The restaurant was founded in 1963 by the late Dino Senesi and has offered traditional Italian food as well as a mixture of American fare on the menu ever since. A historic marker by the cash register proudly proclaims the restaurant served the first lasagna in Carter County.
Kent Williams purchased the restaurant in 1995 and ran the business until 2010, when his sons John and Dave Williams bought him out.
When Kent Williams purchased the restaurant, one of the conditions of the sale was that the name of the restaurant would remain the same, as would the recipes that came with it. In an interview with the Elizabethton Star in 1999, Williams praised the work Senesi did in establishing the restaurant.
“He built a business that all of Elizabethton and Carter County can be proud of,” Williams said. “I wanted to keep carrying over what he had done for both this business and this community.”
After taking over the restaurant from their father, Williams’ sons continued their father’s work in preserving the restaurant.
And now that the brothers have listed the restaurant for sale – at an asking price of $325,000 – they say they want to take the same approach in selling the business that their father took when he purchased it.
“It is important to us that it keeps on going,” John Williams said. His brother agreed. “We want the restaurant to continue and succeed,” Dave Williams added.
Because of their desire to see Dino’s continue to be a part of downtown, the brothers said even though the restaurant is on the market, they will not sell it to just anyone.
“We’ve decided we’re going to do a vetting process for anyone who is interested in buying it,” Dave said. “We’re not going to just unload it on the first person to come along.”
Dave said he and John want to see someone purchase the restaurant who is as interested in maintaining it as their father was; not someone who wants to come in and change everything around and lose what the community has come to love.
While the family loves the restaurant and the community it serves, Dave said they feel it is time to move on.
“It’s a decision we have come to over many months,” he said. “I love it here. It has been a gut wrenching decision for me to make.”
Dave said one of the primary reasons behind the decision to sell the restaurant is his health. He said he has been working in the business for 18 years and normally works anywhere from 50 to 70 hours per week. His health issues are making it increasingly difficult to give the restaurant the attention he feels it needs.
“I’m the kind of guy that it’s all or nothing,” he said. “If I can’t give a total effort then I feel it’s time to move on.”
The restaurant has been a family affair for so long, Dave said, that when he leaves, John has indicated he doesn’t want to continue to work in the business without him.
While the business is now on the market, Dave said there is no set timeline for the sale to take place. “Who knows how many months or even years it might take to find the right buyer,” he said. Even selling the restaurant is a family affair – Dave and John’s uncle, Dale Williams of Rainbow Realty, is handling the sale.
Dale said the sale will include the building, all of the equipment and – of course – the recipes.
“It’s a turnkey operation,” Dale said. “The boys will even stay and help train the new owners.” 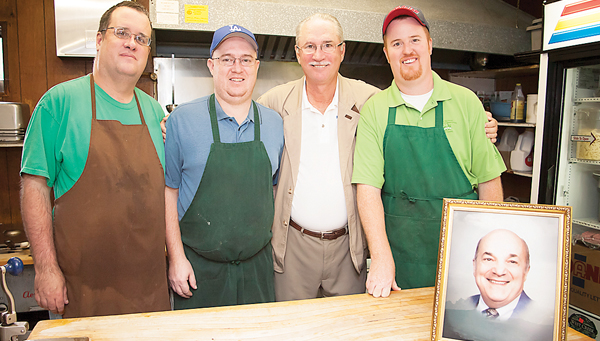 Photo by Brandon Hicks
The Williams Family – Mar, Dave, Kent and John – have worked since 1995 to preserve the legacy of Dino’s restaurant. The founder of the eatery, Dino Senesi, is shown in the portrait.

Photo by Brandon HicksGary Smith has been named as the new EMA director for Carter County. Smith has served as... read more