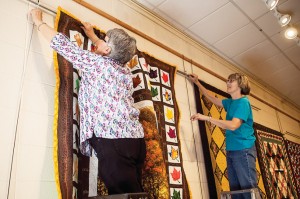 It’s a 20-year quilted tradition.
The Sycamore Stitchers will have dozens of quilts on display during the Sycamore Stitchers Annual Quilt Show this weekend at Sycamore Shoals State Historic Area. The entries in the show are divided into categories, and visitors cast their votes for their favorite in each division.
Show chair Carolyn Buckles said this year’s show has 68 entries, almost double last year’s total.
“The show has been going for some time now,” Buckles said. “We have people who enter every year and we do gain some new ones. We did have to downsize last year and I think that kept some people from registering last year. Now that they are used to the changes, they are coming back.”
Last year, the show had to relocate to the smaller theater space in the Sycamore Shoals visitors center after the community room was converted into an interactive history museum.
Buckles said the club had to limit the number of entries to one quilt per person, in addition to the Club Challenge quilt.
“Before people could do as many as they wanted,” Buckles said. “Now they can have one entry in the show and can do the Challenge if they want to.”
Every year, the show features a Sycamore Stitchers Challenge where club members must incorporate the featured theme or fabric into their quilt.
This year the challenge is “20 Something” in honor of the show’s 20th anniversary.
“There has to be 20 of something, 20 colors, 20 squares,” Buckles said. “There also has to be something emerald, because that is the color for the 20th anniversary, and there needs to be a pieced block.”
The entries in the show are divided into categories for which the public can judge and determine the winner. Those categories were hand-quilted bed quilts, machine-quilted bed quilts, baby quilts, quilted by a paid service, juvenile/lap quilts, holiday wall hangings, wall hangings, miniatures and the Sycamore Stitchers Challenge.
The show opened today at 9 a.m. and will last until 4 p.m. It will also be open on Friday and Saturday from 9 a.m. until 4 p.m. and from 1 p.m. to 4 p.m. on Sunday. The winners of the show will be announced Tuesday morning.

A husband and wife are facing a total of 21 forgery charges after they were accused of forging checks from... read more