Odom holds book signing for ‘And Then There Was Hope’ 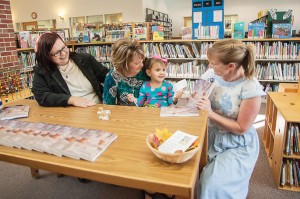 Local abortion alternative advocate and now author, Angie Odom, shared her book “And Then There Was Hope” with the public for the first time during a book signing Thursday at the Elizabethton/Carter County Public Library.
Odom co-wrote the book with Elizabethton Star reporter Abby Morris-Frye. It tells the story surrounding the birth of Odom’s adopted daughter, Isabella Hope.
Odom, the founder and director of Abortion Alternatives and Women’s Center and the TLC Community Center, has shared portions of Bella’s story before, but said the book is the first time the full story has been shared, including the birth, the circumstances which led up to the adoption and the things the family has faced each day caring for a baby who was born addicted to drugs.
“We want this to serve not only as a testament to the miracle God had performed, but as a way of giving hope to others,” Odom said. “We feel like if we don’t share the story then God doesn’t get the glory.”
Because the goal of the book is to share Hope’s story with as many people as possible, Odom felt it was appropriate to debut the book at the library, where she placed two copies of the book for the public to borrow.
“What better way for the story to be read and shared than to have it in the local library,” Odom said.
She said it is important to share the story in order to encourage others who may be facing circumstances that seem impossible. Odom hopes the book can provide encouragement for those who may be battling addiction, facing a crisis pregnancy or dealing with any number of other difficult situations.
“Miracles really do still happen,” she said.
Another book signing was held at Chick-Fil-A in Elizabethton later on Thursday from 3-7 p.m.
Today, book signings will be held at the Coffee Company from 8-10 a.m. and at Dino’s from 11:30 a.m. to 1:30 p.m.
Books can be purchased at the TLC Center at 145 Judge Don Lewis Blvd., Elizabethton, or by contacting Odom at 895-8601 or angiedodom@yahoo.com.
Proceeds from the book will be split between a fund for Hope and the TLC Community Center.

Snap-on Tools of Elizabethton will celebrate a major milestone this weekend as it marks its 40th anniversary of being a... read more