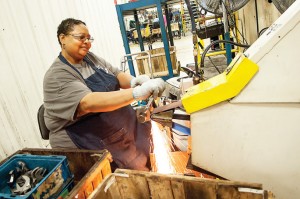 Snap-on Tools of Elizabethton will celebrate a major milestone this weekend as it marks its 40th anniversary of being a part of the Carter County community.
The company first opened its doors in Elizabethton in 1974 with 20 employees. Since then, the company has expanded its facility seven times and now has 400 employees.
“We are seven times bigger than we were when we first started,” said Jon Carley, plant manager. “Our workforce has grown 20 times. Our sales have dramatically increased as well.”
Carley attributes Snap-on’s staying power in Elizabethton to the employee base that comes to work each day at the factory.
“We have a great workforce that takes pride in what they make,” Carley said.
Snap-on Tools of Elizabethton produces primarily wrenches and ratchets, as well as pry bars, chisels, punches and pullers and is the only Snap-on location in Tennessee.
“A lot of our customers want our product because it is made in the United States,” Carley said. “We are the only Snap-on facility that makes the product we do. So, when we make them, they go all over the world. It is a recognizable brand name.”
Not only are the employees considered the key to Snap-on’s success in Elizabethton, but they are also part of the reason that Snap-on has chosen to remain in Carter County for four decades.
“They are a dedicated workforce,” said Human Resources Manager Robin Allen. “They appreciate our presence here in the community and are proud to work here.”
Carley agreed that Elizabethton Snap-on employees have a “good work ethic.” He added that Snap-on likes to be a part of a smaller community because of the impact that can be made on the surrounding area.
The company is frequently a part of fundraisers and other charity drives that give back to the community, Allen said.
To reward the employees, retirees and their families for their dedication to Snap-on, they will be treated to a celebration picnic on Saturday evening at the plant.
“We look forward to the next 40 years,” Carley said.

Downtown Elizabethton will be a bustling hub of fall activities in the next few weeks as the downtown merchants and... read more