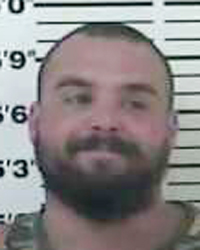 A Carter County inmate is facing additional charges after police say he put a “choke hold” on a corrections officer who was attempting to restrain another inmate.
Travis Arthur Mizzell, 28, 346 H Heaton Road, was served with a warrant on Thursday by Carter County Sheriff’s Department Deputy Christopher Reichenbach charging him with one count of assault.
According to a report by Reichenbach, Mizzell was charged in connection with an incident which occurred on Sept. 28 at the Carter County Detention Center.Reichenbach said Corrections Officer Justin Rice was working as the direct supervision officer in C Block.
“At 9:56 p.m., Officer Rice had inmate Bradley Mizzellon the ground attempting to place handcuffs on the inmate due to an incident that had just occurred,” Reichenbachsaid. “While this was taking place inmate Travis Mizzell, who is the brother of inmate Bradley Mizzell, came up behind Officer Rice and wrapped his arms around his neck, placing Officer Rice in a choke hold.
“Officer Rice let go of inmate Bradley Mizzell after being placed in the choke hold, and inmate Travis Mizzell removed his hands from Officer Rice at that time.”
Reichenbach said additional officers arrived in C Block shortly after the incident and assisted Rice in placing both Travis Mizzell and Bradley Mizzell in handcuffs and returning them to their assigned cells.
Travis Mizzell is being charged with one count of assault for putting Officer Rice in a choke hold, Reichenbach said.
He is currently serving time in the Carter County Detention Center following convictions on meth-related charges, and is scheduled to appear in Carter County General Sessions Court on Nov. 3 on the new assault charge.

Stadium rotation a turn “in the right direction”

For the Elizabethton City School system, it turns out that a 90-degree turn was a turn in the right direction.... read more