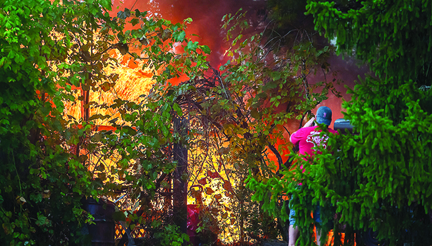 Photo by Brandon Hicks
John Malone surveys the fire scene at a home on Starlight Drive after he helped the woman inside the home to safety.

Unaware that her house was on fire, a Carter County woman escaped injury Monday afternoon when a local restaurant owner came to her rescue.
John Malone, co-owner of Jiggy Ray’s Pizza in downtown Elizabethton, was returning home to his house on Starlight Drive when he noticed smoke coming from the home located at 123 Starlight Drive.
Malone alerted the woman who lived there and then helped her get out.
“I saw the smoke before I turned onto the road,” Malone said. “I pulled up to the house and I was banging on the walls, screaming to see if anyone was at home. She was in the kitchen and I helped her get out of the house.”
Malone said he attempted to extinguish the fire at the rear of the home, but the water hose was on fire as well.
Bystanders said the woman went back into the home to get her pocketbook and cell phone before being taken to a neighbor’s house.
Firefighters from Stoney Creek Volunteer Fire Department, along with Hampton/Valley Forge and Watauga Volunteer Fire departments, were dispatched to the home.
When firefighters arrived on the scene, flames and smoke were billowing from the rear of the house around the roof. Crews worked quickly to get the blaze under control amid concerns that oxygen and propane tanks were in or around the property.
The cause of the fire and the names of the residents were not available at press time.