During Storytime at library, children given instruction on how to play it safe 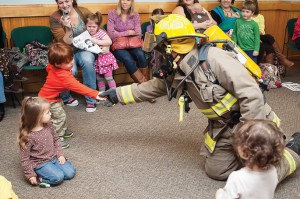 October is Fire Safety Month, and it is also the start of the early cold and flu season. To help spread awareness on these topics, young readers at the Elizabethton/Carter County Public Library were treated to a double safety lesson during Tuesday’s Storytime session.
First the children learned about proper handwashing techniques from April Pierce with the Carter County Health Department and the TENNderCARE program. Members of the Elizabethton Fire Department also told the youngsters about fire safety.
“Flu season is here,” Pierce said. “We like to talk to parents and children early about the proper way to wash their hands and how to limit the spread of germs.”
Pierce read the children a short story about what to do and what not to do in certain situations where germs could be a concern, like sneezing, opening doors, contact with food and others.
She also told the youngsters how to make sure hands are thoroughly cleaned when washing, and emphasized the need to wash all parts of their hands for the length of the “Alphabet Song.” Pierce also explained that if handwashing isn’t an option, using alcohol-based hand sanitizers is a good backup.
“Germs are not for sharing,” Pierce told the children.
She distributed hand sanitizer and cold and flu information to the kids and their parents.
After the handwashing lesson, EFD firefighter Jeremiah Tolley and engineer JD McAnninch talked to the group about fire safety and what to do in a fire.
“Education is the big reason we do this,” McAnninch said.
Firefighters explained the importance of smoke detectors are, as is having a family emergency plan in case of fire at their home. They explained having a place to meet outside, away from the home so everyone will know where other family members are is an important way to keep everyone safe.
McAnninch told the students never to go back into a burning building after they had gotten out.
“Toys can be bought,” he said. “You cannot. Never go back in after you get out.”
The firefighters also taught the young readers the proper method to “stop, drop and roll” in case their clothes caught on fire. Tolley told the children to cover their faces while rolling, and to roll until their clothes were extinguished.
Tolley also dressed in the department’s turnout gear to show the youngsters what a firefighter would look like if they ever had to enter their home to fight a fire.
After the lesson was over, the readers went outside for an up close look at a fire truck and received “junior firefighter” hats and badge stickers.

Photo by Brandon HicksJohn Malone surveys the fire scene at a home on Starlight Drive after he helped the woman... read more