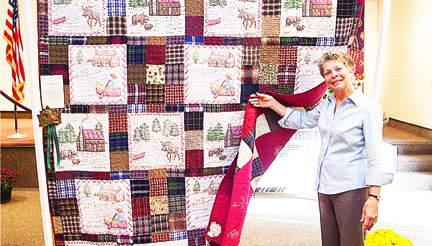 Photo by Brandon Hicks
Lois Jensen won first place in the machine-quilted category with “The Cabin Up North.”

A wide variety of homemade quilts were displayed at the 20th Sycamore Stitchers Quilt Show this past weekend.
Of the 68 entries in the show, the show’s attendees selected eight as winners. Winners represented categories including hand- and machine-quilted pieces, baby quilts, long-arm quilts, juvenile/lap quilts, holiday wall hangings, large wall hangings, miniatures and the Sycamore Stitchers Challenge.
Joyce Stiltner of Gray won the Sycamore Stitchers Challenge. Her quilt, “Ups and Downs,” featured dimensional blocks of assorted bright colors against a golden brown background.
The Challenge required 20 of something be used — colors, materials or squares — in honor of the show’s 20th anniversary. It also had to include a pieced block and the color emerald green.
Stiltner included 20 fabrics, all from her “stash,” and she pieced the dimensional blocks together. She said the background fabric was given to her by Janelle Hart, a former club member who has since passed away.
Stiltner said she saw the pattern for the quilt in a magazine in 2003 and that it had been on her “to do” list since then.
“It was nice to win,” she said. “I have entered it for several years, and this is the first time I have won the Challenge.”
Lois Jensen of Hampton won first place in the machine-quilted category for her creation “The Cabin Up North.”
A family project for her, her mother-in-law and her sister-in-law, Jensen’s entry featured blocks made of cross-stitched woodland scenes with an autumn-colored quilted background. She said the theme was based on a family cabin in the upper peninsula of Michigan.
“My mother-in-law was living with us during the last part of her life,” Jensen said. “I thought it would be nice for us to do a project together. I went to Yates Remnant Shop and bought some cross-stitch kits for us to do.”
Jensen said her mother-in-law was 95 and 96 years old when she worked on the cross-stitch blocks.
“I made the quilt and gave it to her for her 100th birthday,” she said.
Renate Jaeger of Jonesborough won first place in the long-arm machine quilt for “Compass Fantasy.”
She said she was inspired by a similar piece by Judy Mathieson listed in the 100 Best Quilts of the 20th Century.
“I got her permission to recreate a quilt using hers as an inspiration,” Jaeger said.
Describing her piece as “fun to make,” her entry included more than 5,000 pieces that had been pieced with freezer paper. The project took six months.
Jaeger says she plans to display the quilt on a wall in her living room where she rotates her creations with the seasons.
“I’ll hang this one in February when you need something warm in the house,” she said. “It was fun to make.”
Linda Kaiser of Jonesborough won first place in the hand-quilted category for her entry “Flourishes.” Kaiser was not present at the show Tuesday morning to collect her award, but an informational placard on the quilt stated it had taken 15 years to complete.
Hampton resident Sarah Brondos won first place in the baby quilt category for “Sunbonnet Sue and Sam.” Brondos hand appliqued a blanket quilted by Hannah Jensen, Sarah’s mother, for Sarah’s son, Gibson, born in 2001.
Jonesborough resident Angela Harris won the holiday wall hanging category with her quilt “Curved Log Cabin Wreath.”
Eloise Kominek won the small/miniature wall hanging category with “Red Barn.”
In the juvenile/lap quilt category, Flora Joy won with “Camouflage at Sea”; and Lucy Terry won the large wall hanging category with “Color, Color All Around.”
Kominek, Joy and Terry are all of Johnson City.

John Livingston was a young man fresh out of the Air Force when he moved to Murfreesboro and bought a... read more