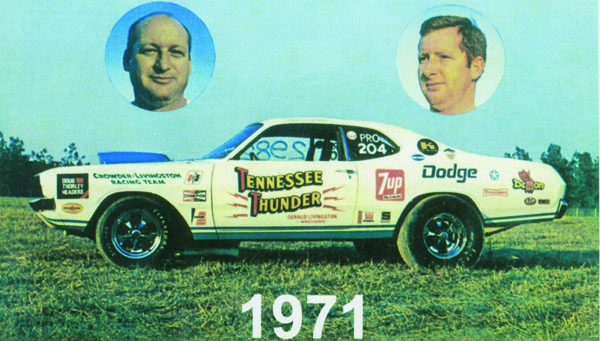 John Livingston was a young man fresh out of the Air Force when he moved to Murfreesboro and bought a service station. It was the first of several businesses he has owned in the last 50 years, and it marked the beginning of his career as a stock car driver.
Although he’s not quite as famous as some racers, Livingston has accomplished a lot in his career and at 77, he is still racing. In fact, he raced at Bowling Green, Ky., in September.
On Saturday, Livingston will be at the car show in downtown Elizabethton, and with him will be Lee Crowder, who will have one of the first cars Livingston ever drove — a 1971 Dodge Demon — on display.
Crowder’s grandfather, Freeman Lee Crowder Sr., and father, Freeman Lee Crowder Jr., bought the car for $14,000 in 1971. They turned it over to driver Livingston and his brother, Gerald, who had been campaigning a string of successful Chevrolets emblazoned with the name “Tennessee Thunder.”
The Livingston brothers had a successful season with the turn-key Pro Stock car and competed as far away as Pomona, Calif.
A desire to compete on a larger scale brought about the replacement of the Demon in 1972 with a ’71 Challenger previously known as the “Motown Missile.”
“Both were pretty good cars, and we had a lot of fun with them,” John said. But after a while, the Livingston brothers parted ways with Crowder and the Demon and Challenger were placed in storage until 1985, when they were sold.
After several years, Lee Crowder and his good friend Larry Ferrell Jr. began looking for the Dodge Demon. Theytraced it to Florida, where it had been in storage for 18 years. Three trips and three years later and after some serious bartering plus $35,000 in cash, Crowder and Ferrell brought their race car home Livingston, Tenn. They had the big race hemi restored, and in August, they displayed it in Livingston.
“Tennessee Thunder” today looks almost exactly as it did in postcards given out when it was running the dragstrips.
John, who grew up in Valley Forge and attended Elizabethton High School, will come home this weekend to appear with the car at the car show. “I’m proud they’re bringing it to Elizabethton,” he said. All told, Livingston has owned and raced 26 cars, all named “Tennessee Thunder.”
Like so many others, John began his racing career with one of the classic cars of all time, a ’57 Chevy. He raced almost every Friday and Saturday.
“Back then you got seven dollars for winning your class and $15 for winning the eliminator and I went to the bank every Monday,” he quipped.
The ’57 picked up wins at Bowling Green and Cumberland Drag Strip as well as at his home track, Union Hill. Like most race car drivers, Livingston had a desire to go faster, and he headed in that direction. He set the C/SX record in Bristol back in 1966 and then teamed up with Herb McCandless and they ran one of the old Ramcharger cars. That model, one of the classic early model Funny Cars, met a quick demise at Livingston’s home track, when he flipped it. His Funny Car career was over, but not his drag racing career.
John, as well as Gerald – who was mechanic most of the time – raced with Mopar before they teamed up with Crowder and his Motown Missile car. He has raced all over the country — from the east coast to the west coast — however, his favorite place to race is Bristol, with Indianapolis coming in second. Both he and Gerald have also done some boat racing.
John also worked in the speed shop business for a while and then in the boat business. He ran several drag boats and won with them as well as setting some national records.
Gerald, who moved back to Elizabethton a few years ago from Murfreesboro, also did some boat racing and won as well, John said. “He got out of racing a long time ago, but I still like being behind the wheel,” he said. “I’ve quit two or three times, but I always went back,” he added, with a grin.
John sold his service station not too long ago, but still has his used car lot and a couple of very nice race cars.
He has raced a lot of cars in many classes, but has yet to win a national NHRA event. However, John has won several divisional races and has been to the final round at NHRA events. “As nice as it would be to win one of them, I’ve really had a good time racing,” he said. “I like being behind the wheel. I enjoy the people. I’ve made a lot of friends, some who are drivers, others are race car owners.”
John says he doesn’t intend to give up racing any time soon; he still has a love for the sport and the same enthusiasm he had when he started out. “I like to race once or twice a month,” he added. “I don’t hunt or fish or play golf, but I love to race. It’s more of a hobby and fun rather than a money-maker.”
He not only has made a little money racing, but has also racked up quite a few trophies and honors. A few years ago, John was inducted into the Division 2 Hall of Fame and that was followed by induction into the East Coast Drag Racing Hall of Fame.
“Those were great honors. To be recognized for what you’ve done is really neat,” John added, noting that he has one room in his Murfreesboro home that has nothing in it but his race car memorabilia.
He enjoys coming back to Elizabethton, which he does quite often, but this weekend will be special when he shares the spotlight with a 1971 Dodge Demon dubbed Tennessee Thunder.
For him, racing is forever.
He says he plans to race as long as he can or until “they put me in the grave.” 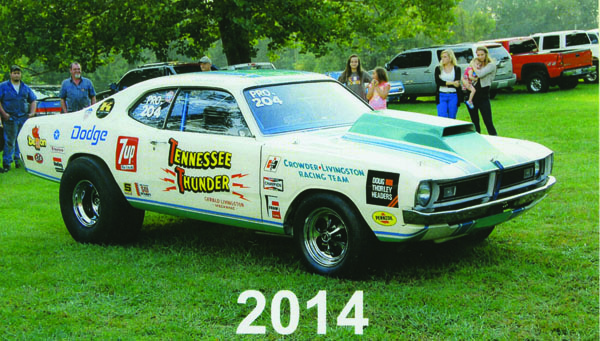 Shady Valley is the place to be this weekend. Fall color is nearing its peak in the Johnson County valleys,... read more