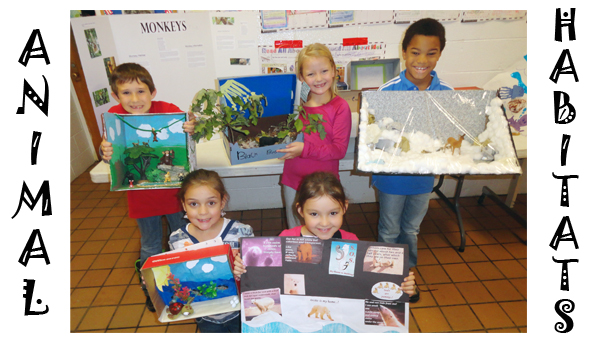 Photo by Abby Morris-Frye
Valley Forge Elementary second-graders show off class projects on animal habitats. In the front row, from left, are Anna Hatley and Abbie Lunsford; in the back, from left, are Tyler Scalf, Briley Davis and Samuel Hayward.

Where do animals live?
That is a question the second-graders at Valley Forge Elementary School can answer, and don’t be surprised if they start telling you about their favorite animals in the process.
The second-grade classes at Valley Forge studied the world’s animal habitats over the past several weeks.
“We did activities in the classroom,” teacher Curry Deloach said. “We also read books on the different habitats.”
The children studied a wide variety of habitats, such as the arctic, woodlands, coral reefs and tropical rain forests.
Deloach said students spent seven weeks studying the various places animals live before completing their final projects — writing reports on their chosen animals and building animal habitats of their own.
The students really enjoyed building the habitats.
Camdin Arrigo, 8, who chose a polar bear for his animal, even added a seal to his polar bear habitat.
“The polar bear is looking at the seal to eat the seal,” Camdin said. “I like polar bears, and the seals are pretty cool because they can go under water.”
Camdin said his favorite part of the project was getting to work on it with his mom and dad. “I like doing family projects.”
Arctic wolves were the choice of 7-year-old Samuel Hayward. Samuel said he chose a wolf as his animal because “it was easier to find than the green iguana.”
Samuel’s said he enjoyed making the snow for his habitat. “It was made of cotton balls,” he said. “That was my favorite part, besides painting the box.”
Briley Davis, 7, gave up on having a deer as her favorite animal and moved on to the black bear.
“We went to places and we couldn’t find a deer, so we went to Wal-Mart and found a polar bear and painted it black,” she said. For Briley, painting was her favorite part of the project.
Tyler Scalf, 7, decided on monkeys.
“I love monkeys,” he said. “My whole bed is full of them. I have a couple of other animals but mostly monkeys.”
Tyler said he enjoyed getting to paint his habitat. “I’ve barely ever painted before,” he explained. “It was fun.”
Anna Hatley, who turned 9 years old on Thursday, selected sea turtles for her creature. “I like sea turtles,” she said, adding she really enjoyed coloring her turtle’s habitat.
A polar bear was the choice of Abbie Lunsford, who turns 8 years old next week. She said she selected polar bears “because I wanted to learn more about them.” Abbie said she enjoyed “gluing and coloring” while building her habitat.
The curriculum for the lesson came from the state’s TNCore website, said Shonna Weddle, the Title I Reading Coach for Valley Forge Elementary.
She said the curriculum focuses on reading and writing as well as student comprehension as part of the RTI2 structure, which stands for Response to Instruction and Intervention.
The program has a three-tier structure according to Weddle. “The whole purpose of this three-tier structure is to allow educators — which is us — to differentiate the instruction based on what the students need,” she said. 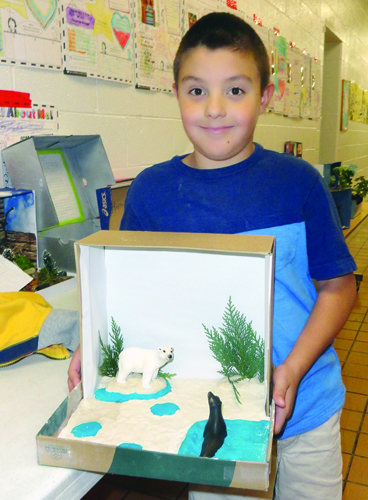 Photo by Abby Morris-Frye
Camdin Arrigo, a second grader at Valley Forge Elementary, shows off his animal habitat project. He chose to demonstrate the natural environment for polar bears and seals.

Every incident police respond to is different, but one recent call may truly be a one-of-a-kind. A city woman called... read more