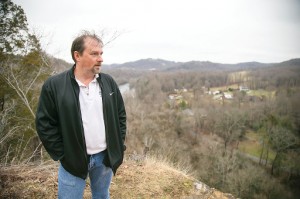 Are there monsters among us?
Legends have long told of things unknown that lurk in the dark, behind the trees and just out of direct sight. One Carter County resident believes these legends are based on the truth after he says he encountered one of these monsters two decades ago.
Robb Phillips, a paranormal investigator and founder of Paranormal Technology Investigations, said he encountered the Tennessee Wildman, a regional version of Bigfoot, at the Watauga Cliffs around 20 years ago.
Phillips’ experience will be the focus of a television show, “Monsters and Mysteries in America,” which will air Jan. 24 on the cable channel Destination America.
Phillips said he has not shared his story with many people before, but when the show’s producers contacted him, he felt the time was right.
“I didn’t tell too many people because they won’t believe you,” he said. “I figured now was a good time to tell it all.”
Phillips said he came in contact with the Tennessee Wildman during a trip to the Watauga Cliffs with his cousin, Randy Sparks, on a summer night. As they made their way to the cliffs in the rain, they noticed something odd in the forest around them, he said.
“It was like everything in the woods just stopped,” Phillips said. “There was no sound at all. Then we heard twigs snapping, and then there was this scream. It was like nothing we had ever heard before. It was not a human sound or an animal sound. Then we took off.”
Phillips and his cousin got separated in the woods in the dark. Phillips found a spot to hide against a tree and stayed there, afraid to move or make any noise. He said then he heard the sounds of twigs breaking as they were stepped on all around him. That noise stopped, but then he heard it coming from the trees above him.
Then he noticed a large being some 20 feet up a tree and about 15 feet in front of him.
“I saw it in the tree, and then I saw my cousin and we took off,” he said. “We made it to the top of the hill, and it was at the bottom of the hill growling. We ran for the cars and got out of there.”
Phillips described the Tennessee Wildman as “stout” and standing around 9 feet tall. He said it was covered in charcoal gray fur that was neither shaggy or fine. He said the creature had red, beady eyes, really long arms and long, sharp-looking claws. But, it was the Wildman’s smell that he noticed first.
“I was always told that if you’re out in the woods and the smell of death comes to get out of there,” he said. “I know what they mean now. That night, I smelled a stink like something had died. It smelled like a body that had died and been left laying out in the sun.”
He said he and his cousin had been pretty sure of what they had experienced right after it happened.
“We knew we had experienced something,” he said. “We had heard the rumors, but when it actually happened, we knew it wasn’t a myth.”
Phillips left the area and had not been back to the cliffs until he visited with the Elizabethton Star for the interview. He said he had heard stories from others who had also encountered the Wildman over the years.
“It doesn’t feel good to be here,” he said, surveying the mountainside. “I’ve been nervous the whole time. This is the first time I’ve been back.”
References to the Tennessee Wildman can be found dating back to the 1800s. In the Hagerstown Mail from March 5, 1871, residents were warned about the Tennessee Wildman lurking in Piney in McNairy County in west Tennessee.
This Wildman approached women with “wild, horrid screams” while attempting to carry them off. He was described as tall, with great muscular strength and covered in dark matted hair. He also ran with swiftness that “defied both men and dogs.”
Phillips will also be a part of another television show to air on Destination America called “A Haunting.” The episode named “Conjuring Evil” will air on Sunday, Jan. 18, at 10 p.m.

What would you do if an armed and angry individual came into your workplace? That is the situation local emergency... read more