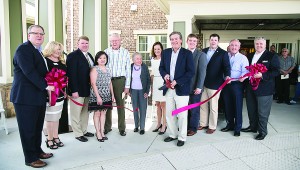 Construction on the $6 million assisted living facility started in April 2014, and local leaders looked back on the process of getting the new facility opened. The community is a 35,000-square-foot facility and includes 30 living suites and as well as a 16-unit memory care wing.

A majority of the rooms available at Sycamore Springs have been spoken for, Ocoee Foundation President John Sheehan said.

“We have had 60 percent of the units preleased,” he said. “That is mind-numbing. Most facilities start with a 25 percent preleasing.”

The 30 assisted-living units were designed for seniors who need some assistance with daily life while maintaining their independence, Bryan Cook, vice-president of operations said. The memory care wing is specifically for patients with Alzheimer’s or forms of dementia.

“We wanted to build a beautiful, well thought out building, and offer care and services to those who need it,” Cook said. “We are fortunate that we get to work with the greatest generations of Americans. This is the generation that won World War II. They fought hard and changed the world. They built the greatest economy the world has ever seen. They are known as a humble, frugal generation. The great thing is now we get the opportunity to serve them.”

The grand opening celebration was held almost “13-months to the day” after the groundbreaking, Sheehan said. The facility had to work to get a sewer line relocated so that construction could begin, and then the groundbreaking was held during on a rainy, stormy day.

“April showers do bring May flowers,” Humphrey said. “When we broke ground on this facility, it was a rainy day and many of us were holding onto our hats and trying to stay dry. Sycamore Springs is considered the nicest assisted living facility east of Knoxville. It is truly a rose in Elizabethton and Carter County’s landscape.”

Bringing the assisted living facility to Elizabethton was a 5 1/2-year process, Seehan said.

“We knew the project could only complement the existing services that we already have in the county,” Sheehan said.

The location for the assisted living facility was selected due to its proximity to other services, including medical offices, retail shops and restaurants.

The Sycamore Springs will have many amenities on site, offering access to staff 24 hours a day, assistance with bathing, grooming and dressing, regular health checks, supervision of medications, housekeeping and linen services.

Other amenities will include a beauty and barber shop, spacious apartments, private bathrooms, country kitchens, two living rooms, large family rooms, scenic porches, a courtyard with grill, a wellness center, a library, a sundeck, an activity room, a dining room and a bus and van for transportation.

Residents may be able to move in to Sycamore Springs as soon as June.