Many old-time musicians got their start on ‘Barrel of Fun’

For many years, the stage of the Bonnie Kate Theater served as the launching pad for old-time musicians who found their way to the “Barrel of Fun” show each Saturday morning at the local theater. 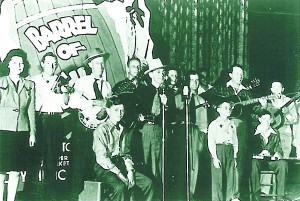 A photo of the Barrel of Fun emcee and performers from the stage of Bonnie Kate.

The show was broadcast on WJHL and served as a proving ground for aspiring entertainers such as Carter and Ralph Stanley and fiddler Clarence “Tater” Tate. The Stanley Brothers got their first radio exposure when they appeared on the show in the early 1940s.

“Barrel of Fun” was broadcast from the Bonnie Kate Theater from 1938-52. The emcee of the show was George Simerly of Valley Forge, who with his son, Gary, made music for many years. Simerly often described the show as “where the unplanned was always expected.”

George and Gary often were joined on the show by George’s brother, Culley, who played bass. Gary was a good steel guitar player.

The announcer for WJHL at the time was Eddie Cowl.

Reece Shipley, another old-time musician, got his start on “Barrel of Fun.” Shipley wrote several Christmas songs as well as a song called “I’ve Got Dimples, Too.”

Another song, “Milk Bucket Boogie,” written in 1952, became a hit for Red Foley.

James Garland, who has worked relentlessly to keep old-time music alive, recalls many musicians who played for “Barrel of Fun” and played their music on radio. Some of the names Garland quickly mentions are Lynn Williams, Paul Buckles and the Green Valley Boys, Conley Smith and the Blue Springs Ramblers, Ann Hazelwood and Norman “Curley” White.

White, a mailman who performed on “Barrel of Fun” from its beginning, later became a member of a band, which included WBEJ engineer Lynn Williams, T.N. Garland, Aileen Buckles, Paul Buckles and Finley Brewer. White later went to work for WBEJ as a disc jockey and had his own early-morning show called “From the White House.”

Both he and Williams, as well as Paul Buckles, enjoyed playing old-time music for WBEJ-Radio for a number of years. All three had long careers with the radio station.

“I can remember when everyone tuned in to the ‘Barrel of Fun’ show on Saturday morning,” said Garland, son of the late T.N. Garland. “It was good family entertainment.”

Like his father, James makes fretted gourd dulcimers and plays them.

“There’s something about old-time music that takes us back to our early roots,” Garland said. “It was brought over with Anglo-Celtic immigrants and is unique to this area.”

For sure, the music was truly “folk.” Singing was used for personal and group enjoyment. “Many of these old musicians played from front porches or at community gatherings,” Garland said. “I remember when radio stations started barn dances with live performances of local talents, and styles began to change. Folks didn’t travel far from home back then, so they made their own entertainment.”

“There were many string bands, with usually one or more fiddlers, a banjo, bass, guitar, mandolin, and possibly a piano. Bands often played at community gatherings, and many of their songs were traditional melodies heard at church gatherings and around the kitchen table. You will find that each musician had his or her own unique style of playing. It helped identify the musician,” Garland said.

The Great Depression of the 1930s put an end to the commercial viability of old-time music. The 1930s and ’40s brought in an individual style of music with people like Hank Williams and the advent of groups like the Stanleys and the Louvins, and the introduction of swing, horns, electricity and bluegrass. “The old traditional music of the mountains gave way to the beginnings of modern commercial country-western music,” Garland said. “Music is evolving all the time.”

“There were many others, but these I remember best,” Garland said.

Garland said his father played a lot with Creed and Joe, who were original members of the Roan Mountain Hilltoppers.

“Finley ‘Pap’ Brewer was a fiddler and banjo player, also from Roan Mountain,” Garland said. “He played the ‘Barrel of Fun.’ My dad took me to his home a lot when I was a kid.”

Garland said Lige and Ray Pierce were the last of the true mountain men — no electricity, no running water, no car.

“They did everything like they did 125 years ago,” he said. “They made gun stocks, pistol grips, knives, tanned hides, banjo necks, hunted ginseng, and gathered moss and ferns. They worked in sawmills and were rough as corn cobs but would do anything for you if they liked you. They were good musicians as well,” Garland added, noting that Lige played the guitar and Ray, the banjo.

Hannibal Oliver, who died young with kidney disease, often made music with T.N. Garland. “He was the only man I saw who could catch barrel chords. He played the Delmore, Monroe Brothers and the Blue Sky Boys tunes a lot,” Garland said.

He also played the “Barrel of Fun” show as well as the “Mid-Day Merry-Go-Round” in Knoxville several times.

Two other musicians Garland enjoys talking about are the Shoun brothers.

“Fred was one of the best musicians in the area,” he said. “He played old-time music as well as jazz and show tunes. He played the tenor banjo and tenor guitar. His brother, Clarence, played several instruments, but I thought he played the accordion the best. Both worked in the coalfields of West Virginia.”

Among Garland’s prized possessions is a fiddle once owned by Bruce Blevins.

“My father gave it to me before his death,” he said. “Bruce was one of the best players of his day. He traveled the coalfields and all around the Southeast playing the fiddle and banjo. They would give him the best jobs in the mines just to get him to play music on the weekends.”

Garland has devoted much of his adult life to preserving the music he grew up with and that was played by his father and grandfather. “There’s just something about that music that is pure and is an important part of our heritage,” he said. “I want to keep it alive for the next generation.” 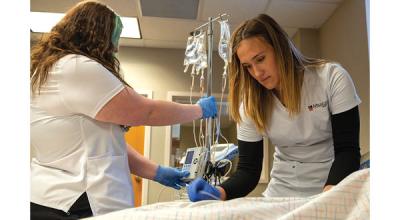