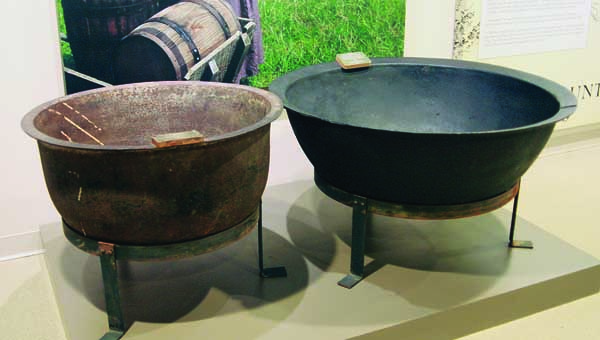 Star Photo/Abby Morris-Frye
These two kettles were once owned by Mary Patton and used at her mill to produce black powder. The kettles were donated to Sycamore Shoals State Park and are now on display in the museum there in part of the exhibit dedicated to Patton’s story.

Last month, the Carter County Commission voted to petition the state to honor a local Revolutionary War heroine by naming a road in her home community in her honor.
The body passed a resolution honoring Mary McKeehan Patton and asking the state to designate the newly constructed roadway off of Gap Creek Road in the Powder Branch community as “The Mary Patton Highway.”
The resolution passed the Commission on a vote of 22-1. The commissioner casting the sole dissenting vote said he, and a lot of county residents, had never heard of Patton and questioned why she should be honored rather than a “military man” who had fought for his country.
While Patton may not be a household name when it comes to historic heroes, the role she played here in what would become Carter County and more than 100 miles away at the Battle of Kings Mountain are without dispute according to one local historian.
Patton’s story begins not in Carter County, but across the sea in England, Sycamore Shoals State Park historic interpreter Chad Bogart said.
As a child, Patton served an apprenticeship under her father, David McKeehan, and learned the art of making gunpowder. The McKeehan family emigrated from England to Pennsylvania in the late 1760s. It was in Pennsylvania that Patton married a man who also worked to manufacture black powder and the two set up their own business.
“They were afraid with tensions rising the British would try to seize their mill, so they moved to the Overmountain region that eventually became Carter County,” Bogart said, adding once here Patton once again set up shop to mill black powder. “It was her gun powder that supplied the Overmountain Men in their victory at Kings Mountain.”
Prior to the march, Patton provided the frontier soldiers with at least 500 pounds of black powder for the battle.
“I consider her a military hero,” Bogart said. “She supplied the militia with the very thing they needed to be victorious.”
The powder produced by Patton was said to be of exceptional quality, Bogart said.
“It was fine powder and it was coveted,” he said. “It sold for about $1 a pound. That was a lot of money then.”
Patton’s mill actually led to the name still used by a community in Carter County. “That’s why we get the name ‘Powder Branch,’” Bogart said. “It’s because of the stream that ran through there and powered her powder operation.”
Though she died in 1836, the Patton Mill remained open and operational until the Civil War when it was sold outside of the family.
“She is a very important historic figure, just as important as other names we hear all the time like John Sevier and John and Landon Carter,” Bogart said. “I think it’s very appropriate they would have the highway named after her.”
Patton was one of many women on the frontier who did their part in the cause of liberty but whose stories aren’t as widely known outside of Carter County, Bogart said, adding the names of Ann Robertson, Patience Cooper and Catherine “Bonnie Kate” Sherrill to the list.
“We had some pretty intrepid women here on the frontier,” he said. “We had a lot of stout women, smart women and courageous women. They deserve to be recognized just like the stout courageous men.”