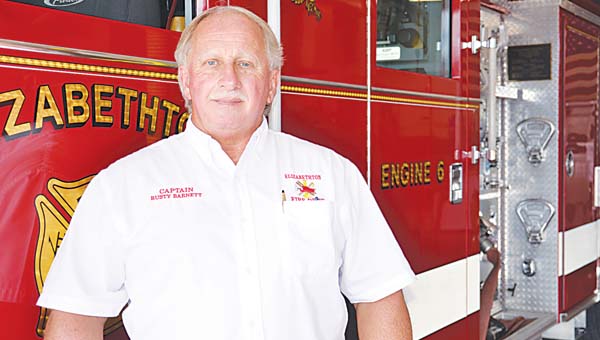 Star Photo/Rebekah Price Captain Rusty Barnett suggests setting brush near the street for the city to pick up, rather than burning it and causing a potentially hazardous situation.

The majority of recent Carter County fires were a result of people burning brush, according to Elizabethton Fire Captain Rusty Barnett. He and the staff of the Elizabethton Fire Department want to encourage everyone to abstain from burning at this time, or to take precautions when burning.
“It’s really dry and people think it’s still really green, but it’s not,” he said. “They’re burning brush piles, but the wind is picking up and getting away from them.”
He said if there is no rain in a few days, the state may implement a burn ban.
“We’re not making an outdoor burn ban at this time, however I would like to ask everyone to use caution when they’re burning,” said Fire Chief Barry Carrier. “Don’t burn if you don’t have to.”
Barnett said if people do burn anything, they must have a water hose on hand, burn at least 50 feet away from any structures or woods and stay with the fire even once it burns down. He said it takes very little wind to turn a pile of embers into a grass fire.
“The best thing to do is just not to burn at all,” he said.
You Might Like

Star Photo/Rebekah Price This decorated downtown bike creatively honors the opening of the trail. After a full day of pedaling... read more