His US record for eating 80 ounces of steak fell, so Elizabethton man decides to shoot for 96 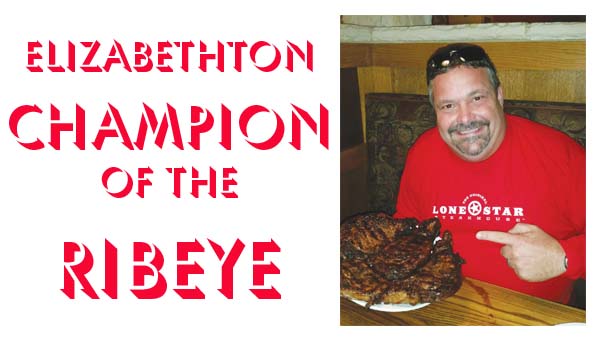 “ ‘Holy cow!’ They bring the plate out and that’s the first thing you think,” said David Brown, “Champion of the Ribeye” at Elizabethton Lone Star, and last week, the national champion.
Brown, of Elizabethton, will endeavor to break his own national record of eating 80 ounces of steak and two sides in under 50 minutes today between 5-6 p.m. He plans to eat 96 ounces, breaking an Oklahoma man’s recent record of 82 ounces.
Prior to the Oklahoma record, Brown held the national high for Lone Star’s “Steak Your Claim,” challenge after setting the Elizabethton record at 40 ounces.
“Steak Your Claim” is a challenge held across the nation at Lone Star Steakhouses in which participants may order a steak of any size, starting at 16 ounces with two sides for $25.99 in an attempt to be crowned the “Champion of the Ribeye” for the city, state or nation. The winner for each store receives a free $20 value steak each month, as long as he or she holds the title.
Before Brown went in on Friday, Aug. 21 — his 46th birthday — the Elizabethton record had been 24 ounces.
“That’s just a bite for me,” he said. So he ate 40 ounces that day with a side of broccoli and a side of green beans in 17 minutes and then finished his wife’s steak.
On the following Monday, he went back with the gift card and asked if anyone had beaten his record. Learning that no one had attempted and intending on eating 60 ounces, he ordered 80. They brought him four 20 ounce steaks and he ate all of it, including every bit of fat and gristle.
“There was nothing left on my plate,” Brown said.
Brown has been a big eater since he was a kid, because his dad made him eat everything on his plate before he could go outside to play.
On Aug. 24, the manager came out when Brown had finished and said he had beaten all national records. Prior to his win, a man in California held the title after having eaten 64 ounces.
After speaking with the manager a few days later to find out that his record had been beaten by 2 ounces, she asked Brown what he was going to do.
“I’m going for 96,” he said. “So I started to prepare myself, because I’m going between 5 and 6 p.m. and going to try to eat 96 ounces of steak.”
He said he has called the restaurant to make sure they have the steak and to make sure Levi will be cooking because, he said, “He is super.”
Brown has been surprised by the media attention. “Wow, I’m a Lone Star Star!” he said.
His friends have calling him “Ribeye Brown” since breaking his initial Elizabethton record.
When guests enter the restaurant they can see his photo posted on a wall, along with a handful of others who have attempted the challenge. “Anyone who wants to take the challenge can absolutely be on the wall,” said Service Manager Ashley Fridley. She said no one has attempted to brave the challenge to beat him, and that until his record his broken, he will continue to get one free steak each month for life.
“He’s determined that if someone beats him, he’s coming back for more,” she said.