Birth of a Ballad: The Capture of Tom Dooley 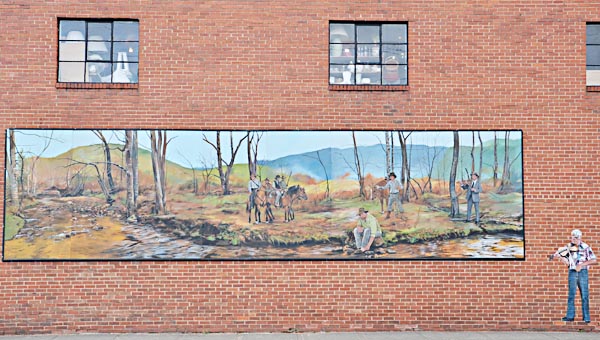 On Saturday in downtown Mountain City, Christy Dunn’s mural titled Birth of a Ballad: The Capture of Tom Dooley, was unveiled, kicking off the Long Journey Home Musical Heritage Tour.
“They were both wonderful, we had people from all over the country,” said Johnson County/Mountain City Economic Development and Tourism Director Karla Purdhomme.
The mural is the second in a series that highlights Mountain City’s rich musical heritage. It honors early 20th Century Gilliam Banmon (GB) Grayson, the blind fiddler, who first recorded The Ballad of Tom Dooley which is credited with beginning the style of folk music which spread throughout the country influencing artists like Bob Dylan, and others throughout the ‘50s and ‘60s, and which inspired a multitude of subgenres of old time, folk and bluegrass music to this day.
The mural, painted on the side of the Mountain City Antiques and Collectibles building, shows GB’s uncle Colonel James Grayson, as he arrests Tom Dula (“Dooley” in the ballad) with a rock in hand and a gun to hold off the others, insuring that he gets a fair trial. Dula is depicted with his feet in the creek in what is now the Pandora Community of Johnson County.
This mural is a permanent representation of the Johnson County’s connection to this ballad and the contributions of its musicians to the folk and country genres.
“The musicians deserve to be honored,” said Dunn. “I feel privileged to do this work for my community. I want people to take pride in where they are from.
She received the President’s Award from Johnson County Arts Council in 2013 for her work on the Clarence “Tom” Ashley Mural.
Like the Grayson family, Clarence “Tom” Ashley, who first recorded “House of the Rising Sun,” is a Johnson County native. His music influenced Jerry Garcia, David Grisman, Fred Price, Doc Watson and Clint Howard, who were on the vanguard of the folk movement of the ‘60s.
The Long Journey Home Tour after the unveiling took participants on a driving and musical tour to birthplaces, graves and historic sites to discover the musical history of the area. At the Doe Creek site, where Colonel James W.M. Grayson captured the infamous Tom Dula, participants enjoyed a performance of murder balads of Appalachia. On the front porch of Clarence “Tom” Ashley’s birthplace, Kenny Price played claw-hammer banjo songs. They also visited the grave site of Colonel Grayson and listened to acapella gospel hymns, as well as the home place of Clint Howard. The finale took place at the home of Fred Price followed by an open jam of musician in attendance.
“Country music may have been born in Bristol, but these mountains are where it was conceived,” said Evelyn Cook, a local arts advocate.