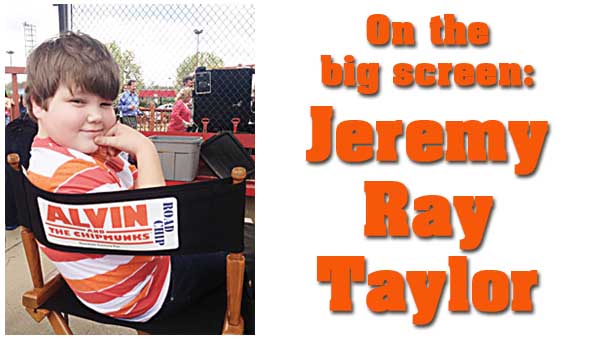 A local teen made his first big screen debut in the recently released film Alvin and The Chipmunks: The Road Chip.
Jeremy Ray Taylor, 12, of Bluff City, began his acting career unexpectedly at the ripe age of eight, after a chance suggestion by a promotions agent for a band with whom his mother was working in Nashville.
“I never thought I would actually be doing this or pursuing it,” he said, explaining how he was discovered. The agent took note of his personality and suggested he audition.
He has since acted in various commercials including Cartoon Network and Disney’s Dreamworks. He also has screen credits in the films 42, The Jackie Robinson Story, The Story of Us — A CBS Pilot, A Madea Christmas, Reed Between the Lines, and Antman. He can also be seen in the Alvin and the Chipmunks “Wreck the Hall” movie trailer.
The most recent chipmunks movie follows Alvin, Simon and Theodore, who through a series of misunderstandings, come to believe that Dave is going to propose to his new girlfriend in Miami and dump them. They have three days to get to him and stop the proposal, saving themselves not only from losing Dave, but possibly from gaining a terrible stepbrother.
Jeremy, the son of Michael and Tracy Taylor, plays the role of a kid who schemes with Miles, played by Josh Green, to get rid of the chipmunks. A portion of the movie was filmed in Atlanta, Georgia, where Taylor joined the all-star cast including Jason Lee, Justin Long and Jesse McCartney.
“It was really great to meet those people and to be on set and to build relationships with them,” he said, adding he especially enjoyed meeting Lee.
Being homeschooled allows him a flexible schedule to practice acting frequently, as he hopes to make a career of it.
“I would love to keep doing this,” he said. “It was cool to see myself on the screen.”
He said that from being around other actors, he has learned everyone has a different style of performing.
Though he practices often and makes improvements by performing in front of mirror to modify his expressions, he said he still gets a bit nervous.
“In my first job I felt pretty nervous, but now that I have more experience, it is easier,” he said.
His family is proud of his success thus far and continues to support him on his journey.
“It is very exciting and humbling to see him using God’s gifts that he’s been given,” his mother said.
To stay up to date with Taylor’s latest news and roles, visit his Facebook page Jeremy Ray Taylor. He said he has another movie coming out this Spring.
He is represented by The Avenue Agency in Nashville, TN and Paradigm in Los Angeles.
“I would love to continue this as a career,” he said.

2015 marked by controversy, accomplishments for county