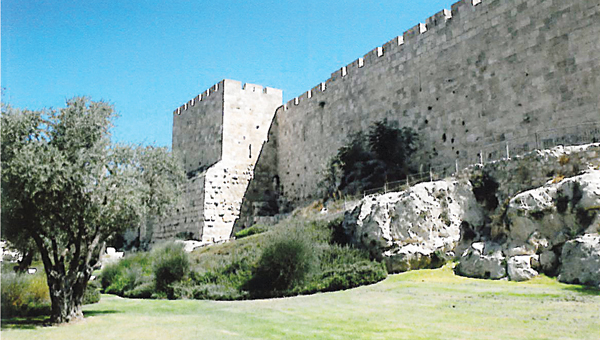 Contributed Photo
The wall of Old Jerusalem stands strong and welcomes visitors to walk the tops of its walls.

Hampton resident and hiking legend Bob Peoples, 72, returned this Fall from a venture of Biblical proportions. Hiking through Israel, he followed the Yam el Yam (Sea to Sea) trail and then took a bus to Nazareth and hiked the Jesus Trail, each of which ended at the Sea of Galilee.
He covered about 100 miles by foot and visited over 25 churches and numerous historical sites. The high temperature was only below 100 degrees Fahrenheit on one day of his three week journey.
Of all the sites and experiences along his route, he said the most outstanding element was the friendliness of the people.
“The thing that amazed me the most was the kindness and generosity of Arabs. They couldn’t give enough to you, they were absolutely super to me,” said Peoples.
In a number of circumstances he was aided and made welcome by locals helping him with directions or accommodations.
More than once, Peoples had to overcome confusion with the varying colors of trail blazes, and at one time, even descended a mountain on the wrong side. He was hiking along the Yam el Yam and at the top of Mount Meron, the trail blaze switched, his trail turned right and he continued straight down the National Scenic Trail.
When he realized his blunder, he confronted a couple loading grapes onto their truck to go to market. He showed them his map and pointed to where he was supposed to be, and they showed him where he was. In the heat, and even though he consistently carried five liters of water, he could not make the trek back over the mountain.
Because their truck was small and loaded down with grapes, they could not give both him and his backpack a ride, but they did allow him to stand on the back of the truck to ride to town.
“They were tremendous people,” said Peoples.
In another instance, he was planning to stay at the Arbel Guesthouse, but because of a holiday, it was completely booked. The woman managing the hostel invited him to tent camp for free by their swimming pool where, and he obliged, enjoying the flowers growing in plenty all around.
On one day hiking, he said four men in their early twenties stopped and shared their lunches with him, which he said were much more delicious than what he had packed.
While navigating the bus system between the Sea of Galilee and Nazareth, on his way from the Yam el Yam to begin the Jesus Trail, he said people were very helpful, including the bus drivers.
Even though 75 percent of the bus riders were veterans with automatic weapons, he said he had no problems boarding and getting to where he needed to go. He showed the driver a sign with his destination and if the driver was headed that way, Peoples boarded and asked him to nudge him when he had arrived at his stop.
A stabbing incident took place in a Jerusalem bus terminal just a week after he left.
Peoples was aware of this when he went, and said, alluding to the violence, “If you went too far north into Lebanon, you’d be on CNN in the morning.”
The growing fear of residents and tourists has led to an economic slump, which Peoples found evident. At the Jordan River Park campground, he was the only camper.
“Nazareth is going under from a lack of tourism because of fear,” he said.
He said he was often the only one hiking and that many of the rural areas have little to offer other than tourism, like Capernaum and Nazareth. “The Nazareth Market had nobody there. Two Asian tour buses were there, but they spent 20 minutes in a church and didn’t visit the spice market, so they made no impact on the local economy.”
The fears that some have were no deterrent for him, and he instead found a populous of friendly folks. He camped most places, but felt that hosts were quite accommodating when he stayed in hostels.
One park ranger attempted to assist him with directions, but did not know that a trailhead had been moved. After Peoples walked for six hours into a reserve, where camping is not allowed, he realized he would have to camp there and would not have time to hike out.
“I put my pack against a rock and my hat on my head, but when I woke, my hat was gone,” he recalled. “Whatever creature it was — I have no idea — but I believe it was going after the salt in the sweatband.” 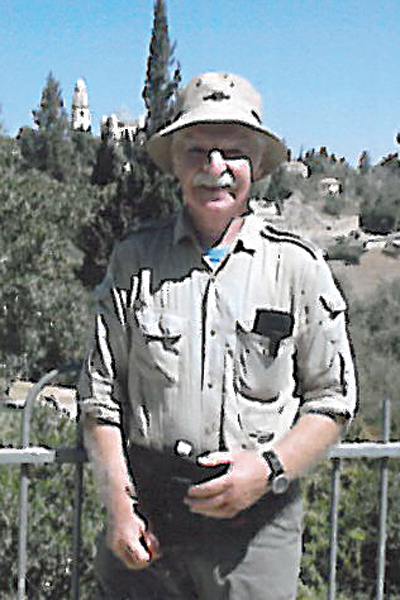 Contributed Photo
Bob Peoples has thousands of miles under his belt, and here is pictured in Jerusalem, hiking along the Jesus Trail.

This was not his only encounter with wildlife.
One of his maps showed a short route off the Jesus trail where he planned to camp along the Sea of Galilee. “Stealth camping” is permitted all around the freshwater sea, but some of the land is privately-owned. In this case, the black trail blaze indicated private land, on which the farmer had moved his livestock to graze the greener area during the drought.
So Peoples bushwhacked his way to the waterfront and made camp. Two hyenas came for a drink of water and surprised Peoples with their size.
“They’re big critters, much bigger than I thought they were,” he said.
Another thing that was unexpected was the number of churches devoted to Mary Magdalene. He did not realize how important of a figurehead she was in other branches of Christianity and said he found one of the churches devoted to her the most beautiful.
The church of Saint Mary Magdalene, on the slopes of the Mount of Olives in the Garden of Gethsemane was built by the Russian Czar Alexander III and his brothers in memory of their mother in 1888. 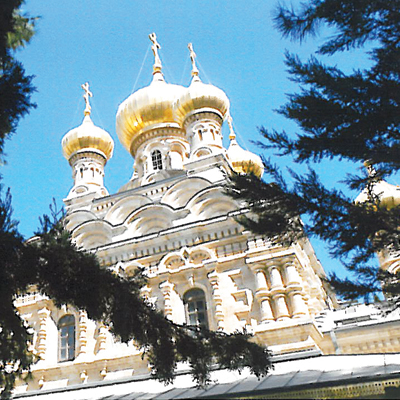 Contributed Photo
Saint Mary Magdalene’s church resembles Russian temples because it was fashioned by Russian Czar Alexander III. Peoples considered it the most beautiful of all the churches he visited.

He visited numerous sites of religious and historical import including the site in Cana of Jesus’ first miracle, the conversion of water into wine. He was impressed to see that the jugs stood about five feet tall, and the wedding party must have enjoyed around 50 gallons of wine.
Towards the end of his journey, he continued along the Sea of Galilee past the end of the Jesus Trail and camped where the Jordan meets the sea, near the birthplace of the Biblical figures Peter, Phillip and Andrew.
He also visited Old Jerusalem and the Tower of David. He was astounded to find that an archeological dig was underway at David’s tomb by the University of North Carolina Charlotte.
Another historical site along his route was the Horns of Hattin, which was used an observation point during the 2nd Crusades by the Crusader Kingdom of Jerusalem against the forces of the Kurdish Ayyubid Sultan Salah ad-Din. Using fire on the dry mountain, Salah ad-Din captured the crusaders. Peoples said the end of the story depends on where it is read, both sides have different tales. He said this is true for much of the myth of the area.
“So much is symbolic, they don’t know exactly about so many sites,” said Peoples, explaining that some may or may not be accurate. This is one reason the historic and spiritual trips interested Peoples, for their ability to shed light on history.
“I would definitely recommend this trip,” said Peoples, who made the venture including airfare and gifts for under $4,000. If the hiking is too difficult, he said many of the destinations along the way are accessible by bus or car. Part of the Jesus Trail coincides with the ancient Silk Road and the entire trail, as well as the Yam el Yam is estimated to take four days. During the hotter summer months, they may take up to eight days, as was the case for Peoples.
He reiterated the kindness of the people in the area and said that the negative things people see on television are a very small portion of the reality. People need to see the country and make their own evaluations he said, noting how he corrected some of his own misconceptions, like the width of the Jordan River and found out the dominant denomination was Greek Orthodox rather than Roman Catholic.
“It’s a learning experience, we are taught stuff that we accept, but to see and realize how many players there really are — it’s good for people to see what it really looks like.”
Peoples owns and manages the Kincora Hostel in Dennis Cove, Hampton, and also organizes the annual Kincora Hard Core trail maintenance days following Trail Days in Damascus. To learn more about his hostel, hiking, or trail maintenance opportunities call him at 423-725-4409.
You Might Like