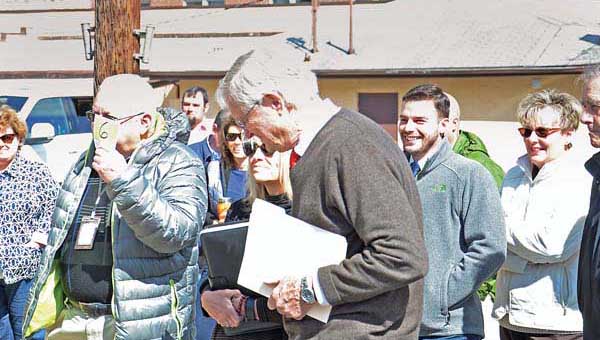 Though many have a vision for the historic Bonnie Kate Theater, it still needs a buyer.

After a brief auction Friday morning, the City of Elizabethton placed the highest bid at $109,000, followed by a $105,000 bid by the owners of Jiggy Rays Downtown Pizzeria.

Because the auction agreement was subject to confirmation, the seller, Citizens Bank, must determine whether to move forward with the city’s offer, funded by the Elizabethton/Carter County Foundation (ECCF), or whether to accept other offers.

Auctioneer Jim Woods said they will accept bids till the auction sells. Jim Woods of Jim Woods Auction and Realty may be contacted at 423-913-0358.

“If anybody is still interested, I would be happy to show them around,” said Woods. “This has been a very lucrative business; it just needs a little soap and water.”

He said the building includes a restaurant space with kitchen, large stage, office space and formerly had an ice cream parlor.

The theater was built in 1926 and both of the highest bidders shared concerns of preserving its historical character.

Fundraising by the ECCF, spearheaded by John and Pam Huber, has been its biggest fundraising endeavor to date, with a current goal of reaching $200,000.

ECCF is the local branch of East Tennessee Foundation (ETF), which raises money to award in grants to local organizations across East Tennessee.

Trudy Hughes, ETF director of regional advancement said ECCF hopes to give the city a grant to fund the purchase of and renovations to the theater.

“John (Huber) brought forward the idea last year — their largest fundraiser ever, and in a quick amount of time,” said Hughes. “That says to me this community is committed to preserving it as a viable community center.”

The agreement would be for the foundation to acquire contributions for three years for the city, said Hughes.

“We would hope that within three years, we could have it in a condition to be used by the city,” she said.

Elizabethton Manager Jerome Kitchens said the city has agreed to hold it in principle while they solicit grants for remodeling, if the bid is approved. He said the plan is to reestablish the restaurant, maybe with a third party vendor, and to open up a performing arts center.

John Seehorn and John Malone, owners of Jiggy Rays, have a similar vision.

Malone said he envisions running a catering business out of it as an event venue, or having a restaurant with office space, catering and concerts.

“We set our maximum at $105,000,” said Malone. “We couldn’t go any higher because of the renovation expenses. I would have been happy to pay more if it didn’t need the renovation.”

Seehorn said overall, they want to see it available as a venue for  the city to use for events, office parties and community gatherings.

“It’s historic, and there are so many memories, so I’d hate to see somebody use it without preserving its character,” said Malone. 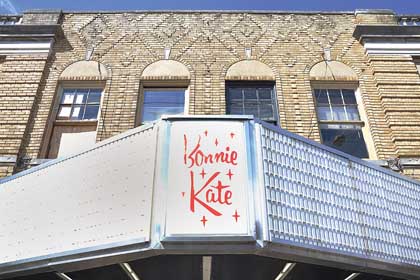 The last owners of the theater were Brian and Cindy Higgs, who purchased it in 2004. They operated it until 2012, showing films, hosting teen nights and other events and operating a cafe, ice cream parlor and bar.

They removed sheetrock in 2014, allowing the theater to become a venue for live music, receptions, plays and parties. They opened the cafe in 2008, in what had formerly been a television repair shop. In 2015, the business went into foreclosure with Citizens Bank as the new owner.

The following history of the Bonnie Kate was recovered from Carter County Register of Deeds, Elizabethton Star archives, and The History of Carter County by Frank Merritt.

The first owner was Mrs. Ollie Browning of Bluefield, West Virginia in 1926. She lived upstairs above the theater. A doctor’s office was later located in the upstairs. A barber shop operated on the south side of the building in the late 1920s.

The theater formally opened to a full house on July 4,  with a christening by former Governor Alfred Taylor.

In the 1930a, a musical program called “Barrel of Fun” was broadcast by two radio stations from the theater on Saturday mornings to a listening audience of  3.2 million in the Southeast.

In 1950, Bob Neal, who owned the Ritz Theater downtown, purchased the theater from the Browning family.

In 1962, Earl Bolling, owner and operator of the Stateline Drive-In bought it from Bob Neal. During his ownership, businesses were located on either side including Mr. B’s Men’s Shop, Edna’s Lady’s Apparel Shop and a television repair shop. Bowling replaced the old fixed-back seats with wider rocking chair seats.

In 1973, Ray Glover began managing the theater with his wife, Jeanette, until 1989. Then, they sold it to Leroy and Agnes Policky, who operated it for 15 years.

During the 1970s, a massive sheetrock wall was built to twin the theater, allowing two movies to be shown simultaneously.

In 2004, Leroy Policky sold the theater to Brian and Cindy Higgs, who operated it till 2012.

Since then, it has been without an owner. A citizens group organized with the intention of turning it into a performing arts center, with funding from the ECCF and purchased in the name of the city.

Three trials for a Roan Mountain teen charged in multiple crimes, including one set to begin Monday, have been postponed... read more