Helen Fetzer at age 97 was always ahead of her time 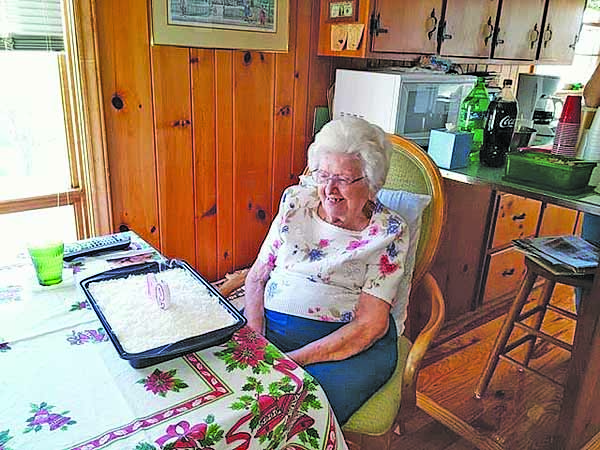 Helen Fetzer was treated by her family with a special cake and celebration on her 97th birthday Jan. 2.

Helen Fetzer describes herself as “an old woman.” Perhaps advanced in years or seasoned would better describe the 97-year-old retired school teacher. She has had many titles and wore many hats in her long life, among them wife, mother, teacher, veteran, and now, widow.
She is also a fountain of wisdom, whose stories and experiences are both refreshing and enriching.
Mrs. Fetzer grew up in Campbell County as one of five children. Her father, when he had a job, worked the mines. “I grew up very poor. It was especially rough during the Depression years. Times were hard,” she said.
As a sign of her brightness, she finished high school at the age of 16. But, there weren’t any jobs to be had, nor any job applications to be given. “Kress, Woolworth’s, no one would even give me a job application,” Fetzer shared.
Now confined to a wheelchair, her hair white, and her face lined with small crinkles of wisdom, Fetzer’s smiles broaden as she draws from her memory to share some small story or experience.
“My dad was a World War I veteran and he had received a one-time bonus of $100. He gave me half of his bonus to go to college,” she shared.
Fetzer started out at Carson-Newman College, but later went to East Tennessee State — the first steps toward her career as a teacher. Her first teaching job was at a one-teacher school in Knox County, where she served as both principal and teacher as well as custodian. Fetzer rode the school bus to her job at Stoney Point School. “I did it all that year. I made aides out of some of the seventh graders, who helped with the younger children and some of the chores,” she shared.
However, her teaching career was put on hold when World War II broke out. “Like everyone else I listened to the radio and read the newspaper to find out all I could about the war. I had always been a fan of President Roosevelt. I recall when he came to Lake City to close the gates at Norris Dam, my dad took us to see him. We stood along the road to Coal Creek to get a look at the presidential motorcade as it drove slowly by the people lined up to see the president. That was an unforgettable experience,” said Fetzer, who still is a FDR fan. Both she and her late husband, John, were loyal Democrats, influenced somewhat by FDR. 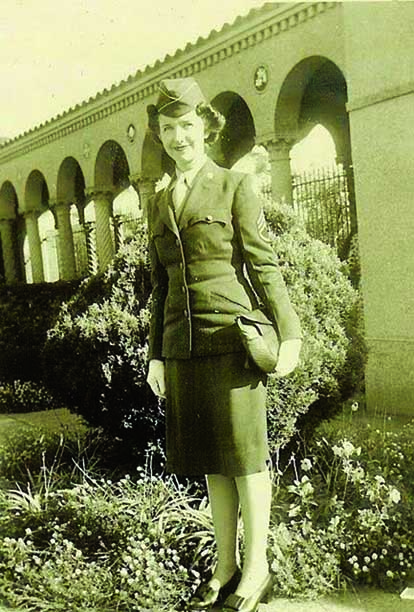 Once World War II broke out, Helen Fetzer was ready to serve her country. She served with the Women’s Army Corps in Washington, D.C.

As she listened to the war news, Fetzer mused, “If they take women, I just might go.” Her time came when in 1943 she joined the Women’s Army Corps. “There were eight of us who went from Knoxville to go to Fort Oglethorpe, Ga., to be tested. I made the highest score, but at that time there were no barracks for women, so they told us to go back to our jobs, and as soon as the Army got a place for us to stay they would send for us,” Fetzer said.
When the time did come to go, Fetzer received a letter and a train ticket to Des Moines, Iowa, for training. From there she went to Washington, D.C., where she was assigned to Intelligence in the War Department Building. The women soldiers stayed in Washington hotels.
Fetzer said the women served “to help the men” by taking over as clerks, typists and cooks and filling other non-infantry jobs.
She soon was made sergeant, and was back in school. “I lived within walking distance of George Washington University. I asked for permission to attend some classes. I needed some English and psychology. While living and serving in Washington, I was able to get a full year of English and one course in psychology,” Fetzer said.
She was living in the nation’s capitol when President Roosevelt died. “I cried when I heard the news. I cried along with other military personnel, and even the mayor of Washington. It was a sad time,” Fetzer recalled.
About her military career, Fetzer said she and those first women to serve in the WAC were trailblazers. They got to go and do what no other women had ever done before. 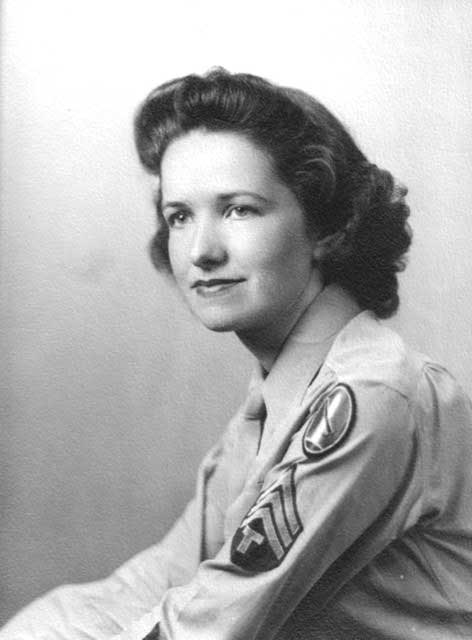 Helen Fetzer is pictured as a young WAC during World War II. She served at the War Department in Washington, D.C., in intellingence.

“World War II changed the way women were viewed in the workforce and in the military. Because of the shortage of men due to the war, women were thrust into the workforce in which inevitably changed their roles in the workplace forever. They began working in blue collar jobs, previously available only to men. Women entered defense plants making airplane frames, engines, propellers, parachutes, gas masks and electrical equipment. These women worked long hours only to go home and cook and clean for their family,” Fetzer shared.
When the war was over, Fetzer returned to her home in the Knoxville area, and to a young man, who had served as a pilot in World War II. Helen had met John Fetzer, her future husband, when she and his sister were roommates at Carson-Newman College. “We had dated a few times, but were never serious,” she said.
John, prior to the war, had worked on the Chickamauga Dam, making 45 cents an hour. He later became an iron worker. “John was a hard worker,” his widow shared with pride.
After the war, the two re-connected and eventually married.
John went to work for TVA, relocating to Carter County to work on the Watauga Dam. In the beginning he stayed in the workcamp near Wilbur Dam during the week, and traveled home to Knoxville to his wife and family on the weekends.
Eventually, Helen and the children moved to Elizabethton, and that is where the Fetzer family settled. “We raised our children here. John later went into the insurance business and became active in local government, serving on city council and the school board. I continued my schooling at ETSU, receiving my Master’s Degree,” Helen shared.
She worked as a supervisor in the Carter County School System and in the Johnson City School System. In addition to her three years in the military, Fetzer was an educator for 34 years. Her last school was Keystone Elementary in Johnson City.
During her career as an educator, Fetzer saw many advancements, among them kindergarten and classes for special-needs children. She also witnessed the advancement of women’s rights. “There was a time when if you got married and were a teacher, you lost your job if a man was available to fill it. Some women wouldn’t marry for fear of losing their job. Well, that wouldn’t happen now,” she said.
She also remembers when both women and men paid a poll tax to vote. “The first president I voted for was FDR. That was before I went into service. I’ve not missed voting since then,” Fetzer said. She still has a receipt for the $1.13 poll tax she paid when living in Knox County. “That was a long time ago,” Fetzer said with a smile.
She is a longtime member of East Side Baptist Church as was her husband. “I can’t complain. I’ve been blessed. I’ve had a good life. It’s not always been easy, but I had a good husband, raised some fine children, and have been blessed with many good friends. I’ve seen a lot of changes, especially in technology,” Fetzer said.
She still remembers the first radio and television she bought. “There have been more changes than I can remember or even care to remember. It has been an amazing time to live.”
Her children, Danny, Bobby and Marie, take turns staying with her on the weekends. A fourth child, her oldest, Dr. John Fetzer, is deceased.
You Might Like

May Day Festival set for May 1 at Sycamore Shoals

On Sunday, May 1, the Upper East Tennessee Celtic Society is inviting everyone to come gather around the maypole for... read more