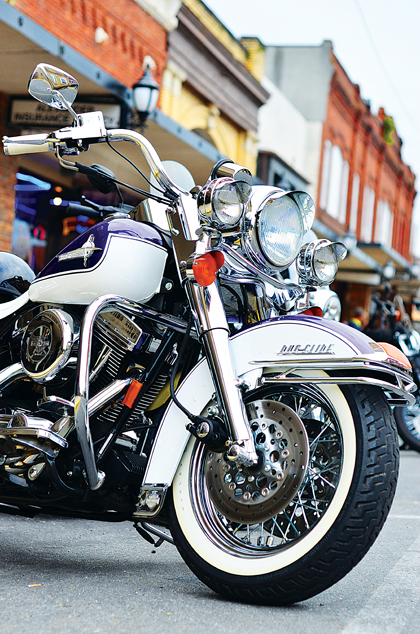 Star Photo/Rebekah Price Bike Nights at Jiggy Rays bring people together from around the region to show off their rides and enjoy pizza in downtown Elizabethton.

Yee-Haw Brewing Company and Smith Brothers Harley Davidson have partnered with Jiggy Rays Downtown Pizzeria to host what have thus far been highly successful weekly Bike Nights. In fact, the numbers of people attending the event have been so tremendous that owners John Malone and John Seehorn went before City Council Thursday to request the closure of the last block of East Elk Avenue and usage of the Bicentennial alleyway.

“We believe this is a great opportunity to invite consumers to our downtown and much like the weekly car show, we feel that it is an opportunity for people from throughout the Tri-Cities to enjoy our downtown and all that it has to offer,” the owners wrote in their request to City Councilmen.

At the first event, Malone said they had more than 300 bikers, and that at the third they had about 175. The events takes place on Monday nights from 6-9 p.m.

Out of concern that closing the block could hinder neighboring businesses, Malone said they discussed it with those merchants.

“We have spoken with almost every business on that last block, to ensure that none of this would affect their business in any way shape or form,” he said. “Every business we spoke to said they all close before 5 or at 5, so it doesn’t negatively affect any businesses at all.”

Malone said the request for closure is to ensure safety for their bikers and other guests. City Manager Jerome Kitchens said he had heard questions of whether they could park off-street, but Malone said that like the car show, one element of the event is the display of the bikes and the ability to see what everyone is riding.

The alley way will be enclosed just like it is during the restaurant’s summer festivals like Jiggyroo, Malone said. City Manager Jerome Kitchens noted the “really good success” the city has had with these festivals.

“We will block off the alley so everything is contained — the same protocol we do with the festivals is of course to card everyone when they first come in and when they purchase alcohol,” Malone told Councilmen.

The owners assured that anyone consuming alcohol would be required to show identification, and that no one underaged would be served alcohol. Malone said they take their responsibility for monitoring this very seriously and that their servers are constantly reminded to be aware and to ensure that only those of legal drinking age consume alcohol.

In addition, he said they passed a “sting” just last week in which an undercover officer attempted to order alcohol without identification proving legal age. He said she was denied and offered water instead. Malone said to his knowledge, no one underaged has ever been served alcohol. He said if it were to be happened, the individual would be banned for creating that sort of liability to their business.

Though City Councilman Bill Carter voted against allowing the 3-hour closure of the block and use of the alleyway, others seemed very much in support of the event. Councilman Bob Cable made a motion to approve, seconded by Councilman Sam Shipley, and all but one voted in favor.

Mayor Curt Alexander commended the business owners, saying this is the sort of thing which could benefit downtown businesses.

“We’ve been talking for years about revitalizing our downtown and bringing people downtown, and I just commend you guys for having that vision and that foresight,” said Alexander. “…I just appreciate what you guys are doing. I’ve gone through downtown at 5:30 on a Monday night, Tuesday night, Wednesday night, Thursday night — and it looks like a ghost town, other than, you know, obviously your place. I really wish we could get more of that. You’ve got a great product, you’ve got a great staff, we’re proud to have you here and I appreciate the responsible approach that you take to conducting your business. I wish you all the success that you could have.”

Visitors come from around the country, Seehorn said, and they always say Elizabethton has the most beautiful downtown.

Malone said, “We love our downtown, we’re proud of our downtown. We want it to grow and succeed.”

To relieve any concerns of Councilman regarding large crowds downtown, Seehorn said most are only there for an hour and a half at most, and they are middle-aged adults riding expensive bikes. “It’s not like the T.V. shows you see,” he said.

“This is the third [bike night] we’ve had, and with the biggest crowd we’ve had, it’s been very subdued,” said Seehorn. “These are some high-dollar bikes coming through; these are 40-, 50-year-old people coming in… It is really just high-class people coming to have a good time on a Monday night and to ride their bikes when the weather’s nice.”