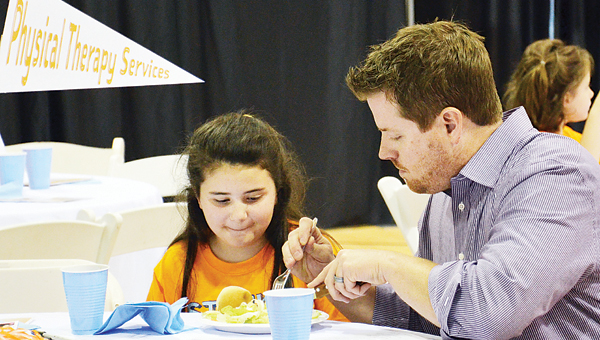 Star Photo/Rebekah Price The Steak’N’Burger is an event held by Boys and Girls Clubs across America in order to raise support for the clubs, but also to make kids feel special. At the luncheon, attendees eat burgers and the club kids eat steaks, and many get help cutting their steaks from their new friends at their tables.

Emceed by two 9-year-olds, the inaugural Steak’N’Burger Tuesday was an overwhelming show of community support. The luncheon raised over $30,000 for the Boys and Girls Club of Elizabethton and Carter County with 220 in attendance and numerous sponsorships and donations.

More than 700 children will benefit from this support, as well as their families who depend on the services of the club.

At each table, attendees and club members enjoyed lunch together, sharing stories and laughing.

Two club members, Jonathon Espinoza and Emmy Conklin shared the responsibility of being master of ceremonies, told how the club has benefitted them and introduced guest speakers.

Vicci Graham, a parent of two club members, explained what the club has meant to her family, followed by a story by University of Tennessee Men’s Basketball Head Coach Rick Barnes of the impact of youth clubs in his life.

Graham said the club was supportive in a difficult time in her life, and that it helped her children to grow, develop positive interests and feel loved.

“They helped me through that time… and that means a lot to someone like me,” Graham said. “This club gave me more help than I’ve ever known, and I wanted to be here to tell them how much they’ve helped my family.”

Other than their love of and support for her daughter, she said her son discovered a love of sports and is now a fine ball player. She has been able to work and to know that her kids are in safe hands and being given the tools they need to succeed. Her daughter even won an award for leadership through involvement with a women’s group through the BGC.

“If you ever think that this is just a place that watches kids, I don’t want you to think that,” Graham said. “…I will forever be grateful and will support this place in any way I can for what it has done for my family.”

Barnes said all those supporting the club and those who work at or volunteer at the club are living life on a mission for others — and that’s what it’s all about. 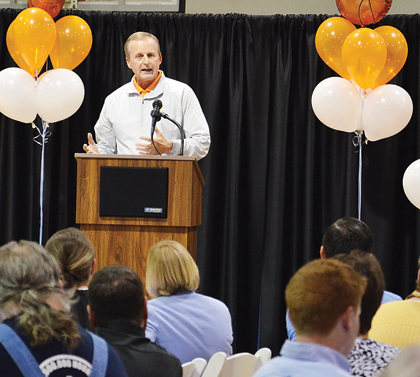 Star Photo/Rebekah Price UT Men’s Basketball Head Coach Rick Barnes spoke about his childhood, being raised by his grandparents and attending a youth club as a boy. He talked about the importance of that club and his coaches challenging him and believing in him that led him to where he is in life today.

He reiterated a point Graham made in her story, saying, “Tough things happen to a lot of people.”

He explained how as a child, his community center in Hickory, North Carolina and a handful of leaders and coaches in his life are the reason he was able to press on despite his sister’s death, being raised by his grandparents and failing his classes.

“Right here you’ve got people living in a mission asking everyday, ‘How can I help someone today?’” Barnes said, referring to the staff and volunteers at the club.

He said he teaches this to his basketball players, and that in the winter, he got a call saying one of his players had bought a homeless person a blanket. He told the team members, “We may have just had our season’s biggest win today because of what Kyle did for that man. There’s more to it than winning basketball games.”

In the same way, BGC Board President Sam LaPorte said the club is more than an opportunity to play sports with friends, more than homework assistance, more than college visits, and more than special programs. BGC Board Director Lynn Richardson said Graham’s story could be multiplied for numerous families in Carter County, and for the kids who benefit from these opportunities and the daily support from BGC staff and volunteers.

“These children may not live in your house or have your DNA, but they’re all of our kids — they are the future of this community,” Richardson said.

Event sponsors include Citizens Bank, Carter County Bank, Tetrick Funeral Home, LaPorte and Norris, Lingerfelt Drug and Gift Center, Snap-on Tools and many other table and community sponsors. Barnes committed to match donations raised at the luncheon if they could raise at least $4,000. The final amount raised will be announced Wednesday.

For more information on the Boys and Girls Club of Elizabethton and Carter County, visit www.bgcecc.org.