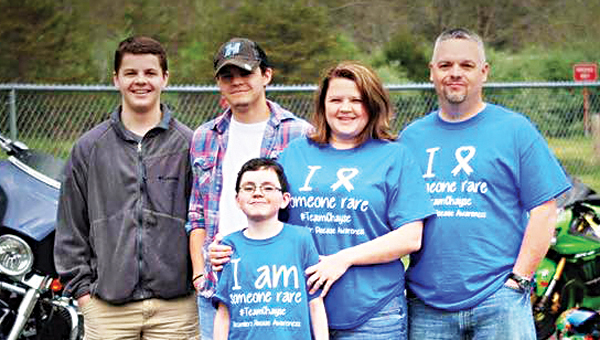 Contributed Photo Chayse (center) is pictured with his parents, Greg and Kristal, and his brothers Jared and Bryceon at a recent benefit motorcycle ride.

A Hampton 12-year-old is fighting Alexander Disease, but he’s not alone. Six bands will perform live Saturday night at the Hampton High School gymnasium from 6-9 as part of a benefit concert to support Chayse Andrews and his family in their battle against the luekodystrophy.

The night will also include food, games and raffles. All donations and proceeds will help the Andrews family with medical and travel expenses and any other necessities.

Alexander disease attacks the myelin sheath which protects the brain’s nerves, and it impairs abilities at different rates. According to the National Library of Medicine, approximately 500 cases have been diagnosed since 1949, when the disease was first identified.

Chayse just returned from Children’s Hospital of Philadelphia, where he met with one of few pediatric neurologists familiar with this rare disease, Dr. Amy Waldman.

“It was a positive experience,” his mother Kristal said. “We had a lot of questions answered about issues he’s had his whole life. She was very optimistic about treatment happening soon.”

Kristal said Waldman was very impressed with how well he’s doing since he began showing symptoms at about age four or five.

“They said he’s doing way better than a lot of kids, but that could change,” she said. “We don’t really know.”

While in Philadelphia, Chayse participated in three days of research and one day of clinical studies.

“On the clinical day, he saw different specialists and did really well,” Kristal said. “The anxiety and his GI issues are his biggest things right now.”

The research is to help measure the severity of his case, Kristal said, as each is different.

“He’ll probably lose his ability to walk, speak and swallow — without treatment, he could lose those,” she said. “There’s no way to look at one person and predict what will happen. Everybody doesn’t need the same treatment.”

She said they will return at least annually to Philadelphia, and that Waldman will advise his specialist in Nashville at Vanderbilt.

“The area of his brain that’s affected controls hunger, thirst, speech, and emotions — things we take for granted,” she said.

For now, he is continuing to do physical therapy and being as active as possible. Despite his anxiety, Kristal said he is his same positive and outgoing self.

Those that cannot attend the concert, but want to support the family can make donations at Carter County Bank to an account under the names of Greg and Kristal Andrews. T-shirts will be available for order at the concert. Follow Chayse’s journey on his Facebook page called Team Chayse Updates.