Ridge runner to educate, promote conservation on the Roan 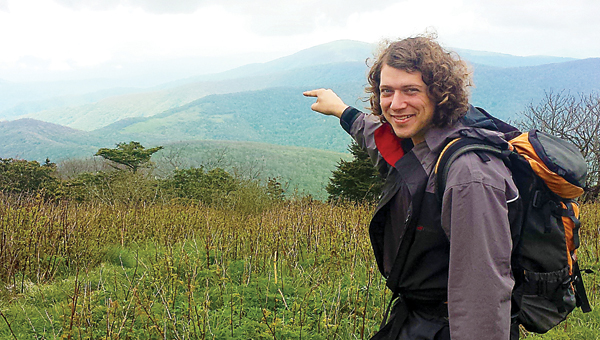 Contributed Photo Eric Rayfield, 2016 ridge runner, points to his home from Grassy Ridge on Roan Mountain, where he will be doing research and educating hikers four days weekly. Aside from his experience in environmental education, one of his hiring managers said he was selected because he is from the area and is passionate about the rare ecosystem of the Roan.

If you frequent the Roan, you may begin to see some familiar tracks on the trail. Eric Rayfield will spend his summer in one of conservationists’ and hikers’ most coveted positions: the ridge runner.

The ridge runner position is funded by a collaborative effort between the Southern Appalachian Highlands Conservancy (SAHC) and the Appalachian Trail Conservancy with the purpose of educating hikers and conducting research on rare species and hiker behaviors.

“His main job is to interact with hikers and people visiting the Roan to teach them about ‘leave no trace’ ethics on the trail and also to teach them about the ecosystems and the rare plants and animals that are found on the Roan,” said SAHC Stewardship Director Marquette Crockett.

He will oversee an approximately 13-mile section from Hughes Gap to the Overmountain Shelter from mid-May through mid-August. His weeks will consist of four days on the Roan including camping Friday and Saturday nights along the trail.

“Half of his time is ‘leave no trace’ education, and the other half is helping us do stewardship work,” Crockett said. “So he’ll dismantle fire rings, pack out trash, do golden wing warbler surveys and blackberry density surveys, among other things.”

Rayfield said he would collect data on rare and endangered plant and animal species like the golden-winged warbler, Roan Bluet, spreading avens and Gray’s lily.

“I will be doing golden-winged warbler research to survey how many nesting males there are, as they are endangered and very rare to Southern Appalachia,” Rayfield said.

This will provide vital information about the species, Crockett said, as well as informing trail maintainers of which plants are okay to remove when clearing overgrowth around the trail.

“I really am looking forward to being out on the trail everyday,” he said. “I love Roan Mountain. It’s a really delicate ecosystem and different than anything else in the world. I’m excited to be out there four days a week and to teach other people about how special this place is.”

His interactions with hikers will help to educate about sustainable practices.

“I’ll be basically setting an example to other hikers about leave no trace principals which are guidelines to help lessen hiker impact on the ecosystem by taking out trash, staying on trails and not harming wildlife,” Rayfield said. “That’s an important aspect of the job —not only to educate, but to set an example.”

He will also gather data on hikers for the ATC, which will help determine the types of frequent hikers and their habits.

He is well-prepared for this type of work as he has diverse environmental education experience and is currently completing his masters at Appalachian State University. His undergraduate studies focused on wildlife biology with a minor in outdoor adventure studies at Lees McRae College. Rayfield said he worked in environmental education at the Carolina Raptor Center, where he trained birds of prey and taught with children. He said he also taught backpacking programs at national parks and used to be a backpacking club president at Lees McRae.

“Eric was picked because he’s local, and he has a good combination of backpacking and hiking skills as well as a lot of naturalist skills,” Crockett said.

While completing his work as the ridge runner, he said he may also work on his thesis studying high elevation bumble bees.

“I can’t say how much I appreciate native wildlife, flowers, birds and reptiles,” Rayfield said.

Each year, a new conservationist steps into the boots of the ridge runner. Crockett said they begin to accept applications in the spring and typically like to hire locals.

Contributed Photo Chayse (center) is pictured with his parents, Greg and Kristal, and his brothers Jared and Bryceon at a... read more